At HHS, students learn the power of the spoken word 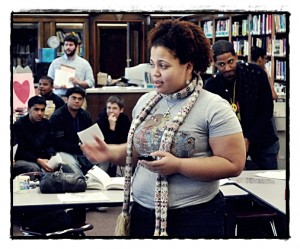 By Alan Madeliene
“Let’s Take it to the Stage!”
Well, that immortal phrase popularized by the Funkadelic might be one way of saying it.
In any case, that’s just what some Hamtramck High School students will have a chance to do, thanks to the efforts of their librarian, Nancy Erickson, along with English instructors Valerie Allen, Toni Coral and Tina Nalepa.
Erickson was attending the Music Hall in Detroit with her husband one evening, seeing comedian Bill Maher. She picked up a flier. That led to a phone call with local rapper “Fluent,” aka Joel Greene, about his spoken word competitions for teens, called “Words and Music of the ‘D’.”
The end result of that contact is that Hamtramck High will be one of two area schools (Detroit’s Mumford being the other) that will send a group of their best and brightest wordsmiths to the Music Hall on April 10. There they will “take it to the stage,” reading their verse as the opening for three or four major hip-hop acts.
Needless to say, the opportunity has had the kids buzzing. There’s even been a spike in students attending school since this was announced, according to Erickson.
“It’s been especially noticable in first hour, which typically suffers poorer attendance,” she said with a smile.
Rapper “Fluent,” Joel Greene, has visited the school several times recently to oversee the student readings. A former emcee at the vaunted Detroit hip-hop site Cafe Mahoghany, he’s been encouraging the students to write, and hopefully memorize, their own poetry.
A group of students have been chosen, based on both their work and their performance ability, to “represent” at the Music Hall: Milton Rucker, Omar Thabet, Wadie Ali, Brenton Freeman, Justina Shines, Tanjina Chowdhury, Siddiq Aezah, Winston Grant, Fadel Al-Marsoumi, Nilufa Miah and Demetrius Timberlake.
Greene is no stranger to working with students. This is the third year he’s offered the program.
According to the Hamtramck High school paper, Greene “… was so happy (with) the amount of talent in (the) school.” He went on to say that he “connected with the students,” and had “a great time kicking back and just having fun listening to what the poets wrote.”
For certain aspects of the project, the adults have some decisions to make. For example, the organizers have chosen to use the phrase, “spoken word” instead of saying “rap.” This is primarily because of the negative associations many, presumably parents, have with the latter term.
Additionally, Greene is adamant and upfront on the ground rules: no hard cursing, no overtly sexual language and so on. The main concern involves stemming a temptation to emulate the stuff that shocks just for shock value’s sake, which is when the adults must apply the guidelines.
Funding for the project has once again been secured by the Music Hall, and its President and Artistic Director Vince Paul was there personally, at HHS, to observe the on-stage action one recent Wednesday. Paul, under whom Greene works, was eager to talk up the program during a recent phone conversation.
“The program is a tool to clarify who the kids are,” Paul said. “It provokes them to tell their stories. Many, at first, thought they had nothing to say.”
This year’s program came with an extra effort in securing funding and star power. Whereas last year’s show featured well-known rapper Talib Kweli, for example, and had the backing of both McDonald’s and the automaker Scion, neither sponsor is onboard this time, and a plan to procure iconic artist “Mos Def” as the featured act also fell through.
Still, the program soldiers on, and has gotten commitments from national acts “Currency” and “Pac Div,” as well as locals “Ro Spit” and “Sheefy McFly,” who will intersperse among the kids’ readings. And the plan is to do it all again next year.
“We teachers are searching for ways to bring “Fluent” (Greene) back to the school,” Erickson said. “The research is clear: when community artists, writers, actors and poets assist students with projects in the core curriculum, the result is improved academic achievement.”
And don’t be surprised if Hamtramck one day rocks with word rhythm directly.
The teachers are also in the first stages of talks with some of Hamtramck’s cultural brain trust, such as the HATCH artists’ collective and Planet Ant Theatre, to build partnerships with the school.
Ultimately, some of our own local stages may become the ones the kids “take it to” next.