At HPS district-wide science fair, there’s a method to the madness 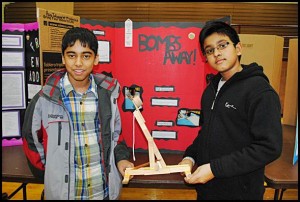 What fruit or vegetable holds the most electricity? Does the color of light affect the amount of energy it produces? And how would you go about figuring those things out?

The answers to all of those questions and more could be found last Monday at the Community Center during the annual district-wide Hamtramck Public Schools Science Fair. The event featured the top projects from each school in the district.

For most students, participation in the fair was optional, which is something that Dickinson East Elementary School fifth grade teacher and science fair coordinator Eva Klikovac says actually makes for better projects. According to her, letting students decide on their own whether-or-not to participate results in better experiments.

“If a child wants to do it, they do a better job,” she says. “And the children really do give it their all. Lots of work and effort goes into creating the projects.”

For those who do participate, there is a lot of work involved. Each student must first come up with a question they would like to answer, and then a hypothesis laying out how exactly they can test their theory. An experiment is then conducted, the results are recorded, and a conclusion is made.

And to make things even more difficult, rather than just being a demonstration each experiment must have some sort of measurable variable, as well as a hypothesis that can actually be tested. The end result is that the experiments don’t just explain how something works, but why.

In order to actually build and conduct the experiments, students were allowed to work in Klikovac’s class before school from 7:30 to 8 a.m. and after school from 3:30 to 5:30 p.m.  They also had an opportunity to work on their projects in prep class.

If that sounds like dedication, it definitely is. Klikovac has been coordinating the science fair for about 15 years now, and during that time she has expanded the scope from just 7th and 8th graders to one that includes 6th graders as well. This year, there was even a 5th grader who participated.

After the district-wide fair, the next contest is in March at Cobo Hall. Students moving on to this round must first enter online, providing an abstract of their project and information about themselves. If their applications are approved, the projects will be judged on March 13 and displayed for the public from 9 a.m. to 8 p.m. on March 14 and 15.

So, other than learning, what’s the best part about participating?

The costs are covered by the district, which pays for display boards, materials for experiments, entry fees, ribbons and food for events. And when it’s all over, each child gets to go to the Detroit Science Center and see an IMAX movie.

“I truly believe in math and science, and I’m so proud of each student. But if it wasn’t for the administration’s support we wouldn’t be able to do this,” says Klikovac. “It’s really a collaborative effort between parents, students, teachers, and the administration.”