At Kabob House, there is always room for one more 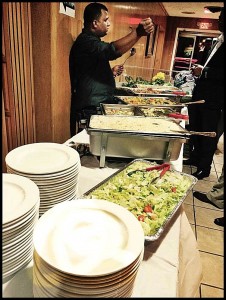 Shaker Sadeak, the owner of newly-opened Kabob House and Banquet on Conant, serves up a lunch buffet.

By Mike Murphy
Special to The Review
Restaurants that specialize in Bangladeshi dishes may be adding up in Hamtramck, but Kabob House and Banquet may be the first one that can almost literally feed an army.
Opened on July 20 and currently enjoying an increase in business, the Kabob House boasts of a newly-created kitchen that can produce meals for 2,500 people, and while there are not that many seats in the house, there is still an impressive amount when the dining room and the restaurant’s two banquet halls combine to seat 350 people in 8,000 square feet of space.
“There are other restaurants that serve similar food in Hamtramck, but we want to provide the party rooms for the special occasions, like graduations and weddings and anniversaries,” Kabob House Owner Shaker Sadeak said. “We also serve American food, and Middle Eastern food, and that gives our customers wide-open options.”
For Sadeak, who worked in restaurants in New York, Southfield, and the MGM Casino for 12 years before he had the opportunity to open his own restaurant, the Kabob House is already a success story.
After the lengthy process of finding investors, searching for a location, navigating city building codes, and all the other nagging details that come with opening a new business, Sadeak said opening the restaurant to the public was worth the wait, all three years worth.
“Seven employees and myself are making a living out of this place,” Sadeak said. “So I think that’s an accomplishment.”
He is also grateful to the investors he found for the restaurant — a former funeral home at 11405 Conant that needed to be retrofitted with fire sprinklers to be brought up to code. That repair alone took a $40,000 chunk out of a budget that did not consider the addition of fire sprinklers in the first place. That detail put Sadeak one year behind schedule.
Sadeak said despite the delays his investors never balked.
“They believed in me,” Sadeak said. “I convinced them that there is a need for a restaurant with a party hall. Hopefully, I can make them a profit and get myself a good salary.”
Although Kabob House serves all kinds of food, its specialties — bihari kabob with naan bread, a mixed grill combo that includes tandoori chicken, shish kabob, shami kabob and the Kabob House biryani — remain in the realm of Bengali-Indian-Pakistani food, as does much of the menu, which includes well-known dishes like chicken vindaloo and galubjamen.
Initial reviews on Yelp are raving about the restaurant for its “amazing food, fresh ingredients, cleanliness, and friendly service.” The restaurant also serves traditional Bangladeshi drinks and fresh-squeezed juices.
Sadeak said he will soon be handing out coupons that will allow diners who bring a friend or their family one free meal, but meals are generally very affordable to begin with. Dishes are generally priced at less than $10.
The restaurant offers a lunch buffet from 11 a.m. to 3 p.m. Monday through Friday that includes 12 different items for $7.95.
Sadeak said he is happy to join other new business owners who are recognizing that Hamtramck is a growing opportunity with myriad opportunities when it comes to new business ventures, but more importantly, he wants area residents to come in and sample the food.
“I want everybody in town to try this. It is really affordable,” Sadeak said.
Besides restaurant seating for dining in, The Kabob House and Banquet also offers takeout and delivery services. Call (313) 366-2060 for hours of operation and additional information.