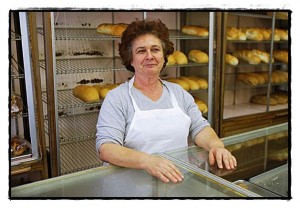 It seems, these days, that they’re dropping like flies.

Another Hamtramck-area business will shut its doors for good this Saturday. The venerable New Deluxe Bakery will treat its loyal customers to free donuts and coffee, and then, it will be no more.

Owner Rose Gjorgjeski smiled as she gazed around the building, itself over 100 years old. She and her husband Steve have run the place for the past 25 years, since 1986. His serious health concerns have necessitated a move that, clearly, comes with mixed feelings.

Daughter Michelle, along with sons Mise and Kris, have increasingly had to help out, despite holding other jobs. Cut to this past Wednesday, Michelle works the counter, while mom Rose prepares cherry nut coffee cake in the back.

One person strays in behind me, but then, in a flash, there are half a dozen more. As with any good neighborhood business, they all seem to know the Gjorgjeskis pretty well.

One man buys some bread, then mentions to Rose that he’s stockpiling it in his freezer, trying to stave off the inevitable. Another person orders two onion rye loaves, plus a loaf of rye with seeds.

“Sliced medium,” he throws in. But he’s not done yet. As an afterthought, he gets four “black and whites” – large cookies, half dipped in chocolate, it appears – thrown in to the bag as well. Rose works out the price for all of it on a small calculator: $8.85.

“I’ve been seeing you here since 1977,” he adds, heading for the door. He’s almost right. Rose later mentions that she’s worked there since “(her) husband’s cousin had it,” around late 1978 or early 79.

Last Saturday night, a customer set up a chair in the corner, pulled out an accordion, and started an impromptu serenade. Rose seems amazed by the gesture.

She says she’ll take care of her husband, and also her elderly parents, who need care as well.

And she’ll bake at home. Maybe. Maybe see about helping make angel wings for the holidays.

The city’s been very good to her, she says.

“Especially the men in blue. And the firemen! They saved my husband. (Steve) Paruk. DPW. They’ve done a great job.”
She grows wistful again, briefly, but her smile returns just as fast.

Nor is she sure whether they’ll sell the building off right away: “It’s all a bit much to deal with at once.” She’s very sad to leave. The customers are like family, she adds.

But, one thing remains true: Time waits for no one.

Even when it’s offered a donut and coffee. 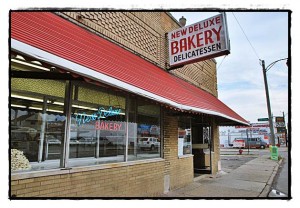