At the Poletown Plant, the atmosphere is electric 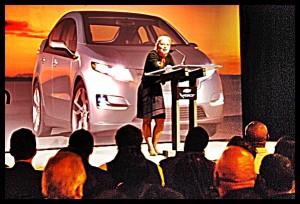 By Charles Sercombe
Monday’s announcement about GM’s production of the hybrid vehicle, the Volt, wasn’t exactly breaking news.
But it was welcomed news nonetheless.
GM had said less than a year ago that it planned to build the car at the Poletown Plant. Monday’s press conference confirmed those plans and then some. GM said it is investing over $300 million in the plant and another $400 million in several other plants in the state to support production of the car.
That doesn’t mean additional workers will be coming into Poletown, but it does mean at least the remaining workers won’t be losing their jobs. Several thousand of the cars are expected to roll out of the Poletown plant in 2010, and production will ramp up the following year with as many as 60,000 Volts being produced.
The car is able to travel 40 miles on an electrical charge. A gasoline powered engine kicks in once the battery is reduced to 70 percent of its charge. In all, the car can travel several hundred miles on a tank of gasoline.
At the press conference, held at the Poletown Plant, several high-profile elected officials spoke, including Hamtramck Mayor Karen Majewski.
Gov. Jennifer Granholm said production of the Volt will be a key part in leading the state out of its current “dark economic times.” She also said the engineering and production of the Volt’s battery is an example of the state’s attempt to diversify its economy.
The federal government has given out 12 grants worth $1.3 billion to the state to develop this new battery technology. Granholm said this technology will lead to the creation of 40,000 jobs.
Michigan has lost one million jobs in manufacturing in the last 10 years, a staggering number that economists say will never be recovered.
Majewski — a full-time historian — put the production of the Volt in historical perspective. She said it was 100 years ago that the Dodge brothers opened their Dodge Main Plant in Hamtramck, which at that time was considered a major technological leap forward.
“So now, nearly one hundred years after we were formed and transformed by the technology of the automobile, the City of Hamtramck continues to travel this historic road, together with our business partners at GM, UAW workers and our municipal neighbor, the great City of Detroit,” Majewski said.
While news of the Volt was applauded, Hamtramck officials still have a bone of contention with Detroit officials over how much Hamtramck receives in revenue sharing from the Poletown Plant.
As of now, the city will receive $1.9 million less each year from the plant. Detroit and Hamtramck have a special agreement in revenue sharing from the plant, which straddles both cities.