At Town Hall meeting, the question of snow removal hasn’t melted away 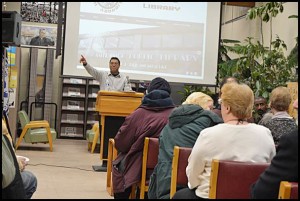 Ron Orr of the Hamtramck Community Initiative talks about current projects in the city at last week’s Town Hall meeting, held in the public library.

By Charles Sercombe
What’s on the mind of residents these days?
Snow removal.
That was the ongoing theme of concerns residents talked about at last week’s Town Hall meeting, sponsored by the Hamtramck Community Initiative.
Peggy Maley of Prescott St. got the snowball rolling, so to speak, when she asked about the “900-pound elephant in the room” that no one had previously addressed during the meeting.
Her concern was over the lack of snow removal from side streets, which lead to dangerous ruts forming and a high middle ridge that threatened to “tear the undercarriage of cars away.”
Several other residents chimed in with the same sentiment, leaving the big question of the night, “what is the city going to do?” largely unanswered.
To her credit, Kathy Angerer, the Director of Community & Economic Development, tried to form an answer that would bring a closure. She said the city administration is aware of the problem, and promised that by before next winter, there will be a plan in place.
No matter what, though, the options won’t appease everyone and will likely cause some kind of inconvenience for residents.
Or, one could shake off this winter as an anomaly.
“It was just a bad winter,” shrugged Tony Liggett.
The evening offered informal presentations from the police and fire chiefs. 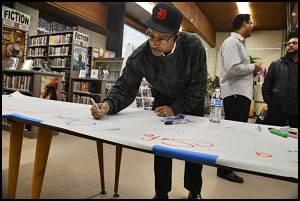 Residents vent their concerns and frustrations about the city at last week’s Town Hall meeting.

Police Chief Max Garbarino said that despite having 10 fewer officers than this time last year, his department is still maintaining its legendary response time.
“What you may see is fewer officers on the street,” Garbarino said.
On the plus side, there are now more reserve officers on tap to help shore up the cutback in officers.
There is also a community patrol that has several resident volunteers.
Garbarino added that once warm weather sets in, he will have one or two officers patrolling the city on mountain bikes.
Fire Chief Paul Wilk also said his staffing was down, but only by one firefighter per shift.
On the other hand, the ongoing razing of abandoned houses has resulted in fewer potential fires. 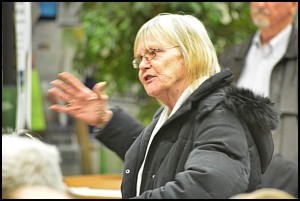 The department has a budget booster, thanks to a federal grant called SAFER, which has supplemented the budget by half. Wilk said there is a good chance it will be extended another year.
Speaking of public safety, the chairwoman of the Hamtramck Community Initiative, Sharon Buttry, said her organization is working on a citywide emergency preparedness plan.
In the meantime, she said, every Hamtramck family should have their own emergency plan.
Attendees were encouraged to write down on a long sheet of paper some of their suggestions to improve the city.
On the wish list were:
“More trees!”
“Citywide sidewalk repair – job was ½ done!”
“Trowbridge + Lumpkin needs a stop sign!”
“Demolish 2118 Trowbridge 2 fires & a rat trap!”
“Continue adopt a lot program”

“The city should buy the property north of carpenter to Davison”
“Mark sewers”
Perhaps the biggest news of the night came near the end of the meeting. State Rep. Rose Mary Robinson announced that she had just came back from Lansing where the Legislature voted to approve a metal scrapping law.
The law, if approved by the governor, will require stricter rules for scrap yards to accept metal from people off the street.
Although the law was a bit watered down, Robinson said “it was a step in the right direction.”
The practice of metal scrapping has been a scourge to many cities, especially in Detroit, which has experienced many empty and occupied houses and buildings being illegally stripped of valuable metals.

One Response to At Town Hall meeting, the question of snow removal hasn’t melted away