At Veterans Park, a whole lot of TLC is needed 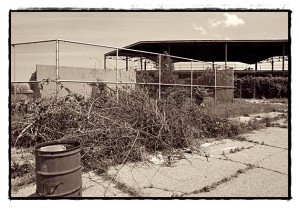 Several years ago, there was a lot of interest in Veterans Memorial Park.

And by interest we mean there was often heated debate in the City Council Chamber over its condition and what direction the city should go with it.

Believe it or not, at one time some city officials basically wanted to pour cement over most of the park and build a “community center” slash police station. That proposal set off a crusade to not only save the park, but also make sure if any future proposal came up to do away with the park, the voters would first have to weigh in on the matter.

After that fight, there was a lot of volunteer interest in maintaining the park and investing in improvements.

One thing has remained a constant in this lengthy debate: the park’s maintenance seems to wax and wane.

Right now, the park is looking pretty shabby — at least the back portion. The two baseball fields look like they are no longer being used. In one, litter is strewn everywhere and on the day we visited, three young men were stretched out on the dugout benches in the middle of the day.

Asked what they were doing, one man said: “Just hanging.”

So, what if a lone kid stumbled into this scene? Really — what was up with three guys loitering about in baseball dugouts? 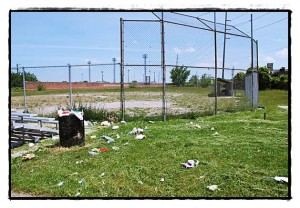 The grass was also just being cut after growing to about two feet high. That didn’t stop a charter school from holding an end-of-the-summer program for what looked like about 200 kids, despite the tall grass.

Veterans Park is city-owned, but in a deal with the public school district, the job of cutting the park’s grass falls to the district.

Even though the school district is facing a $6 million budget deficit, it has agreed to maintain the park.

While the park may not be in the best of shape now, that isn’t to say the park is not on the radar of city officials. Recently, the city completed a Master Plan, and there are several proposals for the park.

Unfortunately, as you can likely guess, it requires money and volunteers.

The two ball fields may be repurposed as soccer fields or even a place for cricket games. More security lighting is also being looked at as well as replacing a playscape that was burned down not once, but twice (or is it three times?).

In a separate effort, volunteers are seeking historical designation for the baseball grandstands, which is likely to have hosted Negro League baseball teams decades ago before blacks were integrated into mainstream baseball.

If the historical designation comes through, there could be funding to revamp the grandstands and baseball field. It could become a popular sight-seeing stop for many out-of-town fans of baseball history.

City Manager Bill Cooper said funding for the overall improvement of the park depends on finding both public and private funding sources.

“It’s very frustrating,” Cooper said about starting up improvements. “We want to move forward on it.”

The city has already set aside $50,000 from a yearly federal grant to create a bike path around the park that will link up to the “Dequindre Cut” that goes to the Detroit River.

All of this is going to take time and patience, though.

In the meantime, city officials admit maintenance is high on the list of things to do.

“The big part is getting it cleaned up,” said Jason Friedmann, the Director of Community & Economic Development.

The even bigger challenge is finding a way to do that with the city’s extremely limited budget. And considering the fact that some communities are being forced to close some of their parks because of shrinking budgets, at least Hamtramck is talking about ways to improve Veterans Park.

One Response to At Veterans Park, a whole lot of TLC is needed