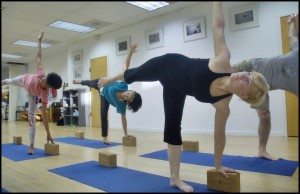 It’s no ordinary form of yoga instruction at Hamtramck’s Yoga Suite. The instructors here specialize in Iyengar Yoga, which focuses on body alignment.

Stress, everyone feels it.

But how can you make it go away?

Look no further than The Yoga Suite, situated in 9618 Jos. Campau on the second floor.

Here, you will find the only treatment in town dedicated to offer individuals spiritual, physical and mental strength, and overall, help them relax.

Director of The Yoga Suite, Michele Pearson, has been studying Iyengar Yoga for about 15 years and has taught it for seven years. She was introduced to the practice at Wayne State University, where she received a degree in Broadcast Journalism.

“The Iyengar Yoga class was very transformative, and it made me decide at that point, even though I still practiced my journalism for years after that, there was still something burning in me that said I want to continue my yoga practice and I want to teach as well,” Pearson said.

Iyengar Yoga is a form of yoga that is particularly known for the use of various props, such as blankets and belts, which allow students of all skill levels to perform different postures (known as asanas).

Pearson said body alignment is a cornerstone of Iyengar Yoga. The practice helps you align all the organic systems, which not only balances and protects “the joints, muscles, organs, vessels, and tissues of the body,” but also increases “the flow of energy to the body and its systems.”

Pearson said there are limited areas where Iyengar Yoga is taught, with the most popular place being in Ann Arbor. She initially opened her practice in Ferndale, and when she moved to Hamtramck, she said she saw some of the needs in the community.

“Everybody had to kind of go to the suburbs in order to get yoga. So I wanted to provide a space for the community for people in Detroit and Hamtramck to be able to come to so they wouldn’t have to travel all the way to the suburbs.”

Going onto her fifth year in Hamtramck, Pearson said she has come to love this city.

“There’s such a wealth, such a mix of cultures here,” she said. “You’ve got great stores, which people don’t realize. … You can have a wealth of different varieties of food here on any given day, which is really good. And what I like is that you can walk wherever you want to go in Hamtramck.”

In February 2012, Pearson joined another Iyengar teacher from Milwaukee, Peggy Hong, who relocated to Detroit.

“We chose Hamtramck (for the site of our studio) because of its central location, its affordability, and its amazingly diverse population. I hope our student population will reflect this diversity,” Hong said. “It’s extremely unusual in the yoga world for two women of color — one Asian, one African-American — to be running a yoga center together. We welcome students of all races of course, but certainly hope to expand our racially diverse yoga community.”

Hong began practicing Iyengar Yoga in 1997 in Milwaukee to complement her dance training.

“However, the yoga took on a life of its own, and eventually I decided to focus entirely on Iyengar Yoga,” she said.

She realized that the practice “corrected imbalances in her body,” thus making her stronger and flexible all around. 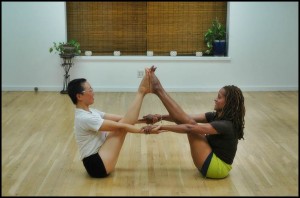 Together, Pearson and Hong offer nine classes a week from beginner to advance level. These classes are presented on a “community gift” basis, which means participants are not required to pay a set fee.

“A typical 90-minute class is $16, but we don’t let that be a determining factor for practice,” Pearson said. “We allow everyone the ability to give what they can, and those who have more to give often give more, paying it forward in a sense.”

But money is not the only way to pay for the classes.

“It also means we engage in alternative currencies, like exchanging food and services like massage for yoga. I teach yoga as a social justice practice and as a tool for healing community,” Hong said.

By practicing yoga, Hong has found that people’s lives can transform.

“With my own eyes, I can see them becoming stronger, more open, more confident, more whole, at the same time that I am healing myself,” she said.

Those lessons are not lost on her students.

“I think that yoga is going to follow me throughout my life. And I think Iyengar Yoga definitely will because I’m always drawn back to it,” said Nicci Kushner.

Kushner is a resident of Ferndale and commutes to Hamtramck for not only work, but for yoga as well. Having tried various kinds of yoga in the past, Kushner said she has practiced Iyengar Yoga for 12 years and enjoyed it the most because it has helped her keep limber, as well as physically and mentally healthy.

“I really like that it focuses on the alignment, the proper alignment of the body, so you don’t get injured,” she said. “It tones and strengthens your muscles (and) it elongates your spine.”

Overall, she describes the practice as “a moving meditation,” saying that it has helped her relax.

“I feel like the body is a whole organ, a whole living piece that is interconnected. If you have problems in one area, you’re going to have problems in another area, so yoga helps you sort of focus all of your energy, physically as well as mentally all at the same time,” Kushner said.

The Yoga Suite consists of participants over the age of 18, but Pearson said there is not an age limit to get involved in the classes.

“If we do any classes that are particular to youth, we allow the children to work together. We wouldn’t put a child in a class with an adult. It’d be more like a child’s class, like age 8 to 13,” Pearson said.

Besides being open to incorporate children, The Yoga Suite is expanding to special classes called, Women of Color, on Mondays.

“It’s a safe space where we can really celebrate our bodies, our ancestry and cultures, and not have to fit into any culturally-imposed boxes,” Pearson said. “Muslim women can remove their hijabs, trans women can feel completely accepted. No one needs to feel self-conscious about their physique in any way,” she explained.

“We hope to get more community in here practicing yoga and making it a place where they feel comfortable and safe,” she said.

The Yoga Suite’s grand opening in their new location at 9618 Jos. Campau on the second floor is Oct. 27 from 1-5 p.m. Everyone is welcome to visit the studio and meet members. To learn more about The Yoga Suite’s class schedules, see its website at TheYogaSuite.com.