Attorney calls for sexual assault charges to be dismissed 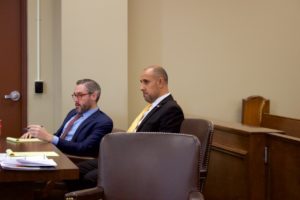 By Charles Sercombe
The court hearing for a well-known community activist who is charged with sexually assaulting a student took a not unexpected twist.
The attorney for Ibrahim Aljahim has filed a motion to have the case dismissed.
The reasons cited for the dismissal are that the alleged victim is not credible and — despite the student being enrolled in a special education program — does not have mental issues.
The motion has delayed court proceedings for the third time in order to allow the Wayne County Prosecutor’s Office to respond to the motion.
Aljahim’s preliminary examination will continue in the Hamtramck 31st District Court on Thursday, Nov. 21, at noon.
He is facing two counts of first-degree criminal sexual assault of a male special education student on Sept. 18 when the student was 18 years old. The student, who attends Oakland International Academy, has since turned 19.
The Review does not identify the name of sexual assault victims.
Aljahim, 37, was the community liaison officer at the charter school, located in the former St. Florian High School building.
He has since been fired from the school.
According to the student’s testimony, Aljahim escorted him to his car in order to get some school books. The student said that while in his car, Aljahim performed oral sex on him and then was told to perform oral sex on Aljahim.
He said he did it because according to his religion, Islam, he must do what his elders tell him to do.
At Thursday’s hearing, it once again started off with Wayne County Assistant Prosecutor, Kristen Cartwright, bickering with defense attorney Roger Farinha.
And once again Judge Alexis Krot admonished both attorneys to behave or face sanctions.
“This behavior in the courtroom is the worst I’ve seen since I’ve been here,” Krot said.
There were two witnesses who were called to testify by the prosecutor’s office: an aunt of the student, and a Hamtramck police officer who took the student’s complaint.
The student now lives with his aunt. The Review also does not identify relatives of sexual assault victims.
She gave a general background on the student’s learning problems and special needs. She said the student has a problem articulating his thoughts, and is often forgetful.
The student, indeed, often struggled to explain what happened to him during his testimony, and often became tongue-tied.
During a series of questions posed by Farinha, in the form of a double-negative, appeared to confuse the student to answer “yes” when he may have meant to say “no.”
Surprisingly, the assistant prosecutor that day, Nida Samona, did not raise an objection to that line of questioning.
The aunt said she became aware of something wrong with her nephew when she got a call on Sept. 18 after school was out. The student was at his grandparent’s home, and when the aunt got there, the student gave her the “tightest hug” ever and kept repeating “I’m glad you guys are here.”
He was then taken to Henry Ford Hospital, but they were told the hospital did not have a sexual assault kit. That’s when the Hamtramck police were called.
Officer Anthony Gonzalez testified that evidence was taken, but did not go into detail.
The prosecutor’s office has not submitted DNA evidence in this case, but previously submitted a certified medical report that says the student is “mentally incapacitated.”
Gonzalez had earlier contact with the student on Sept. 18. He was initially called to the school to investigate students who took a picture of the student’s genitals and shared them with others.
Gonzalez said when he got to the school the principal told him of the alleged sexual assault. He said when he asked the student if there had been an assault, the student said there had not been one.
It wasn’t until the student went to the hospital that he reported the alleged assault.
The student had previously testified that the reason he did not immediately report the alleged assault is because he was “praying inside” about what to do.
There are no more witnesses expected to be called to testify. On Nov. 21, the court will consider whether the case should be dismissed or to bind Aljahim over to the Wayne County Circuit Court where a trial could take place.
It is unusual for a district court judge to not bound over a suspect to circuit court. However, there have been two high-profile cases in recent months, one involving a murder suspect, that Judge Krot did not bind over to circuit court.
If Aljahim is found guilty, he could face a maximum penalty of life in prison. Aljahim is out on bond, but had to surrender his passport and has to wear an electronic tether.
Aljahim, a Yemeni-American, has not responded to requests for comment, but his supporters, mostly fellow Yemeni-Americans, have been active on a Facebook page called “I Love Hamtramck.”
They insist Aljahim is innocent, and that that the prosecutor’s case is falling apart.
Saleh Mosleh Almadrahi said Aljahim is the victim of a “witch-hunt.”
Another supporter, Fakhruddin Abdullah Malahi, said there is an effort “to ruin him (Aljahim) by this false accusations.”
Aljahim is well-connected in local, state and national political circles, mostly with Democratic politicians and candidates.
Nov. 9, 2019