Back in 1997, the Fourth of July wasn’t so festive 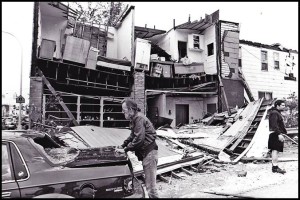 This housing unit on Conant was sliced in half by a tornado that whipped through town in 1997.

By Charles Sercombe
Seventeen years ago, there was little to celebrate during the July Fourth holiday.
That’s because in the late afternoon of July 2 in 1997, a tornado — or something like it — ripped through town in a matter of minutes, damaging hundreds of houses and buildings and knocking over at least 500 giant trees.
Fortunately, there were no deaths tied directly to the storm, but one man died of a heart attack while clearing out a fallen tree.
For about three days most of the city did not have power, and residents were under a curfew — meaning if you wanted to celebrate the Fourth in a bar or at a friend’s, you had to get out of town.
State police were on hand to help enforce the curfew.
The tornado, or what may have been straight-line winds, mostly passed through the center of town. It had come along I-96 from the west and continued east to the Grosse Pointes.
Witnesses said shortly before it hit, the sky turned a green-yellow. While neighborhood damage was limited to trees being uprooted and falling on houses, some businesses suffered serious damage. The worst hit was the former Allen Lumber Yard on Conant and Holbrook, which was totally wiped out and never rebuilt.
Hamtramck was caught unprepared for the emergency. The police station was without power until the county brought in an emergency generator.
The tornado experience has remained seared in the memory of many.
Sophie Raginia remembers it well.
At that time Raginia was living on Trowbridge near I-75 and had a front-row seat, so to speak, of the windstorm rushing in.
“It got so quiet and then you heard the roar,” she said. “I was so scared.”
After the winds died down, a hailstorm followed. Afterward, she ventured out.
“Half the trees on our block were down,” she said. “We had some beautiful trees go down, majestic.” 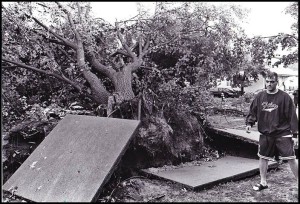 Many large trees were uprooted and fell on houses during the tornado. It took weeks to clear the mess and repair household roofs.

For three days, she lived with no power, and couldn’t run water nor flush the toilet.
Raginia, who now lives in the Hamtramck Senior Apartments, said it reminded her of living in a Third World country where that kind of living standard is the norm.
“Some people live like that all the time,” she said. “You can empathize with people.”
School Boardmember Alan Shulgon also remembers the day well. He was in his car on Holbrook, just outside of the former Polish American Century Club.
“I was moving backwards and my foot was on the brakes,” he said.
After it passed, Shulgon went inside the Polish American Club to see if everyone was all right. The building wasn’t touched, and inside patrons already had candles lit.
Some didn’t realize the full extent of the storm’s force. A few went outside and turned around and said: “Hey, the trees are gone.”
It took weeks to clear out the trees and repair the roofs. 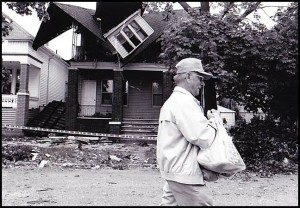 Not just an ordinary day in Hamtramck.

A grassroots organization, Save Our Parks, stepped in  and raised money and tapped into other sources to begin replacing the trees.
The new trees will never grow to the size of those that were lost, namely because those trees should never had been planted in the first place.
So, say goodbye to what was once a unique canopy that some of our residential neighborhoods enjoyed.
And count your blessings that we can enjoy this holiday weekend without being restrained by a curfew.

5 Responses to Back in 1997, the Fourth of July wasn’t so festive