Backlash grows against judge for her comments to elderly, sick man 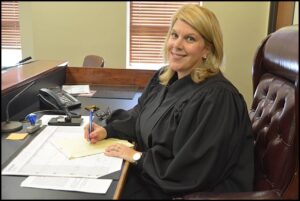 Hamtramck 31st District Court Judge Alexis Krot is being criticized for how she handled a blight case involving an elderly man.

By Charles Sercombe
The court of public opinion has reached a verdict on how Hamtramck 31st District Court Judge Alexis Krot handled a blight case.
And it is: You’re out of order, and disrespectful.
Her punishment might be to eventually get voted out of office, if some voters have a say in the matter.
Krot is facing increasing criticism for dressing down a 72-year-old resident, who was ticketed last August for weeds growing around his garage facing the alley but failed to remove them.
“Shameful,” Krot yelled, in a recording of a court hearing on Tuesday. “The neighbors shouldn’t have to look at that. You should be ashamed of yourself.”
What rubbed a number of residents and others the wrong way was that the man is not only elderly, but also has cancer of the lymph nodes.
Before Krot admonished Burham Chowdhury, he apologized, and said he’s been too weak to remove the weeds.
“I’m very sick, ma’am,” Chowdhury said, with much labored breathing.
Krot further said she would have thrown Chowdhury in jail if she could. She fined him $100.
The recording was the top story on WDIV Channel 4 news at 6 p.m. Tuesday.
The response was immediate.
“I’m quite stunned at her lack of professionalism and disgraceful comments. There’s no reason to speak to him that way,” said Linda Ward, on the Hamtramck Square Facebook page.
Fursan Zokari didn’t mince words either: “She is the worst judge in Hamtramck history! It seems like she hates everybody that lives in Hamtramck. She always talks to people with disrespectful ways. I myself have had a very bad experience with her.”
One viewer put it succinctly in describing Krot’s behavior, calling her “Judge Karen” – a reference to a generic name given to white women publicly yelling and shaming others, usually minorities.
At Tuesday’s city council meeting, Krot’s conduct was the topic of much discussion, although the city council is a separate government body and has no role in the district court’s business.
State Rep. Abraham Aiyash said that he will work with the Chowdhury family, and file a complaint with the state’s Judicial Tenure Commission.
He urged the city council to hold Krot “accountable,” and said she “embarrassed the court.”
“It’s not the first time,” Aiyash added.
Delwar Hussain Ansar, who describes himself as a community activist, called for Krot to resign.
“She doesn’t deserve to be a judge,” Ansar said.
Krot has not commented on the matter.
The incident has also been picked up by national media outlets, such as the Washington Post, which ran a story about it with the headline:
“Michigan Judge Alexis Krot shames cancer patient Burhan Chowdhury for not maintaining home, lawn”
Also posted on the Hamtramck Square Facebook page was a clip of Krot at a 2018 campaign rally at the Gates of Columbus Hall promising those in attendance that as a judge:
“You will get fair and impartial treatment. You will be treated with kindness and patience. You will get your chance to say every word you want to …”

Krot was first appointed to the bench in 2016 by then-Gov. Rick Snyder, after former Judge Paul Paruk resigned to take another job. Krot has since won re-election in 2020, and her current term expires in 2027.
The question now, as some city hall insiders speculated, is whether the ongoing criticism of her court demeanor will lead to her defeat when she faces re-election again.
Posted Jan. 14, 2022

60 Responses to Backlash grows against judge for her comments to elderly, sick man