Bakeries are rolling in the dough for Paczki Day 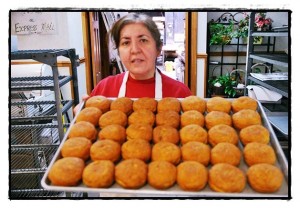 Sandy Bakic of New Martha Washington Bakery will keep her bakery open all night the night before Paczki Day. Yes, that’s how seriously crazy Hamtramck gets about paczki.

Well, the year’s rolled around, like a doughnut hole do.
To Paczki Day, for me and you.
Big gob o’ lard, with a gooey part.
Grab me a boxfull, put it in my cart.

Yes, it’s that time again. Time for everyone to load up on sin, ‘cause the atonin’ times are nigh.

Flavors any local worth their salt will certainly know. Flavors that fill the mouths of many around these parts every Fat Tuesday, year upon year.

Flavors you can’t always get any other time of year.

Vicky Ognanovich, of the New Palace Bakery, is looking forward to the happy chaos again this time.

“It’s a lot of the same names,” she told us. “Regular customers. They come back down here now from outside this area, from the suburbs.”

Up the street a couple of blocks, Sandy Bakic, of New Martha Washington Bakery, also chimed in on the upcoming melee.

“People are excited,” she said, rolling dough in a giant vat with a hand crank. “More people are finding out.”
Sam Alghazali, of Family Donut on the east end of town, thirds the hype.

“Looks like it’s gonna be big,” he said, reached by phone. “We’re freaking out a bit.”

It is his first foray into the madness that is the paczki, although his store has been there, cranking out regular doughnuts, for 35 years. This year, being part of the deal means opening the store at 3 a.m. this coming (“Fat”) Tuesday.

So, what distinguishes a paczki from a regular ol’ jelly doughnut?

If you’ve ever tried one, you know. The average paczki weighs more in your hand. It’s got a harder sort of “shell” of glaze and fry grease. It’s typically filled more full of jelly, as well.

Sometimes, for some people, maybe too much so.

“A woman called to ‘complain’, sort of,” laughs Ognanovich. ‘Can’t you put less filling in?’ She was half kidding. We had to say, ‘Sorry – that’s the way we make them.’”

Those who’ve been doing it for so long have to add the occasional wrinkle, if for no other reason than just to keep themselves interested.

Bokic, also a 40-year veteran in this friendly-ish competition, says that last year was one of the better for sales, and this year is shaping up well, too.

“More people are finding out” about Hamtramck’s old-style recipes, in an era when everyone from Kroger to Meijer has tried to hop late on the paczki bandwagon. Right here in town, in addition to these three fine purveyors of the paczki, Detroit Donut, Bozek’s Market and Polish Market also sell them.

“Come on down, and experience the phenomenon,” she says with pride.

For these fine bakeries, it’s a critical part of their longevity. So indeed, ‘come on down.’

But leave the scale at home. 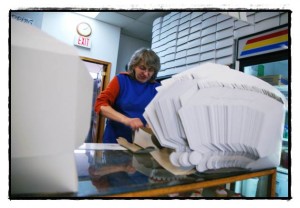 So many boxes, so many dozens of paczki.