‘Banglatown’ is about to get a huge injection of funding 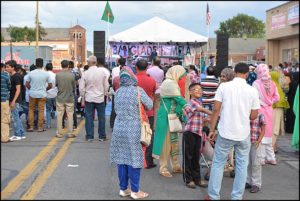 The City of Hamtramck recently designated Conant as “Banglatown.” It is hoped the designation will open up grant opportunities.

By Charles Sercombe
American Axle & Manufacturing is investing $5 million into the neighborhood known as Banglatown.
That neighborhood is just east – and a little north – of Hamtramck, and runs between Jos. Campau and Conant, starting at about Carpenter.
The neighborhood also blurs into part of Hamtramck, on the northeast corner of the city.
However, the investment is being aimed at the Detroit side of the Hamtramck border.
The five-year plan for American Axle, which is being directed by the Detroit Strategic Neighborhood Fund, calls for a number of improvements, including: razing dilapidated houses and buildings, continued improvements in Jayne Field, renovating housing and storefronts, and making Conant and Jos. Campau more pedestrian friendly.
The investment got a boost at Tuesday’s city council meeting, where the council approved having the University of Michigan perform a study of the area, with an eye toward finding out what other improvements can be made.
The state’s Treasury Department is funding the study, which will take about three months to complete.
Hamtramck City Councilmember Anam Miah said he knew an investment was in the works, and that is why he recently introduced a resolution to extend the honorific title of “Banglatown” to include all of Conant, which runs north and south in Detroit and Hamtramck.
“I wanted to make sure Hamtramck is associated with Banglatown, so when you Google the name, not just Detroit comes up,” Miah said.
The resolution was passed with only Councilmember Andrea Karpinski objecting.
Karpinski said she wanted to first make sure all of the businesses along Conant were aware of the designation.
Miah responded by saying the designation doesn’t mean Conant will be renamed, and that there will be “zero cost.”
A number of years ago, the city gave Conant an honorific renaming as Bangladesh Ave. Signs were installed on top of Conant street signs, but they did not remain for long.
The Bangladesh community has been recognized for revitalizing the Conant business district in the 1990s when that street was pocked with one empty storefront after another.
Conant is now a thriving commercial strip.
Conant is also where the Bangladeshi community holds its annual street festival.
May 17, 2019