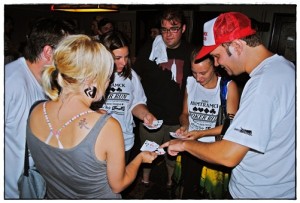 Last Saturday’s (Aug. 14) effort to raise money for the Drug Education For Youth (DEFY) Mentor Program was a well-played – albeit ironic – hand.

Officially titled the 2010 Hamtramck Poker Run, the fundraiser was set up in the form of a bar crawl with a twist. Participants went to five establishments and received a playing card at each, and when the event was over, a full poker hand was held by each runner. Those with the highest hands received prizes.

The day began at the Polish Sea League, where 55 people gathered for the start of the event. At a cost of $10 to enter, each contestant was given a t-shirt (which were paid for with donations from the participating bars) and a list of bars to visit. Whiskey in the Jar, Small’s Bar and Skipper’s Hamtown were all on the itinerary, with The Painted Lady as the final destination.

It was the second time a city-wide pub crawl was held by the Facebook group Hamtramck Bars, and the first time the event was used as a fundraiser. Although the group is unaffiliated with the Hamtramck Weed and Seed, the money raised specifically goes toward DEFY Camp, which is the non-profit organization.

Overall, the Poker Run was a resounding success, netting over $600 including cash from a 50/50 raffle. Additionally, all the bars involved received a notable boost in business during what is otherwise usually a slow period. And at the end of the day, some contestants – like Tracy Cooper, who won the event with a hand of three queens and two tens – didn’t have to go home empty-handed. A number of prizes were donated by the participating bars as well as Detroit Threads.

“It was even better than I expected it to be, and a lot more people showed up than I thought would,” said Kevin LaPointe. “It was a complete success and everyone had a great time. We’ll definitely be doing it again.”