Bars receive a reminder that it’s butts out for cigarettes 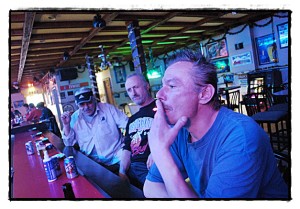 Smoking in Hamtramck bars? No siree, that stopped back in 2010 when a smoking ban went into effect.

It was said back in Prohibition days that someone forgot to tell Hamtramck that you couldn’t sell or consume alcohol anymore.

Those were the wild 1920s when Hamtramck bars operated openly and freely while other cities enforced Prohibition.

Flash forward to today with a ban on smoking in bars and it seems a handful of local bars are flouting the law and allowing employees and patrons to smoke.

During the past week, police officers have been hand-delivering a message from the chief, reminding the bars that smoking inside isn’t allowed. Chief Max Garbarino said there were complaints filed with the state recently about people smoking in bars.

“It was a simple reminder,” Garbarino said. “They were getting a little out of hand.”

State legislators passed a law banning smoking in bars, restaurants and social clubs in 2010. The law was controversial from the get-go, and apparently still is.

Bar owners complained bitterly about losing customers. Others praised the law, saying it was a pleasure to go home without reeking of nicotine.

Anyone who frequents Hamtramck bars knows that in recent months several bars have increasingly slip-slided into allowing their employees and customers to smoke inside.

In fact, it’s a growing trend in other areas as well. State legislators are now considering bills to loosen the regulations.

It can’t come soon enough for Cathie Gordon, a former city councilmember and the owner of New Dodge Lounge.

She said business dropped dramatically when the law went into effect, and said it should be up to bars to decide whether to allow smoking.

Gordon said all bars should have the option to pay an extra fee to the state to allow smoking, just like they do to serve alcohol on Sundays before noon.

“The people can then have the option to go to a place that allows smoking,” she said.

As for Hamtramck police officers delivering notices, she questioned the department’s priorities since the enforcement part of the law is in the hands of the state Department of Community Health.

“We are strapped for officers but they have nothing else better to do?” Gordon said.