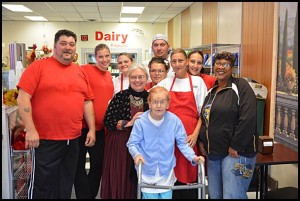 The clan at Bear’s Deli poses with Mayor Karen Majewski (center) at the deli’s recent grand opening. The eatery is at the former location of the Kowalski Deli on Jos. Campau.

By Mike Murphy
Special to The Review
Since last week, the vacant deli on Jos. Campau formerly owned by Kowalski has become Bear’s Deli, and it’s been filled with a wide variety of lunch meats and cheeses, soups and salads, breads, hot coffee, donuts, cakes and other deli staples.
While some might argue that opening a small deli might not be the most glamorous way to bring back a thriving downtown Hamtramck, Ted “Bear” Justus doesn’t see it that way.
He said he sees his deli as filling an important function that might not be filled by a new and trendy restaurant, night club, or art gallery.
“It builds a community,” Justus said. “Jos. Campau is ripe right now. If this works out the way I want it to, I would like to open more stores here.”
And the initial flow of customers coming into the newly-remodeled deli –several small tables with chairs, allow for dining in as well as taking out — seem to think so, too, judging by reactions. 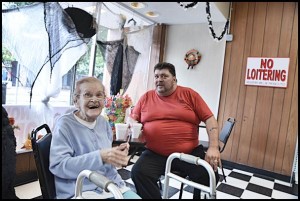 “The community seems to be supportive,” Justus said.  “They’ve let us know they’re glad somebody brought it back.”
Michelle Trzin agreed.
“I’m glad to get soup again,” she said. ‘It’s like the old Kowalski’s.”
And while it is not exactly like the factory-owned Kowalski deli it once was, there are many traces that go beyond mere nostalgia.
Pictures taken at the original deli discovered during remodeling cover hang on one wall. To top that off, the couple’s 95-year-old partner and longtime-friend, Helen Dobrogost, who they call Sliwka (Polish for plum), once owned and operated a Kowalski deli in Highland Park.
The official name of the deli is Sliwka’s, Bear’s and Mary’s Deli, although once the sign for the deli arrives it will just read Bear’s Deli.
Justus sells a full line of Kowalski products and is more concerned that his customers come to him hungry and leave the deli happy than he is with the decor.
He makes two of his 12 soup recipes everyday and stocks the cooler with fresh sandwiches daily. Coffee and doughnuts are available in the morning.
Besides a full line of meats and cheeses, Justus also offers about 30 additional items including salads, yogurts, breads, milk and juices.
“The thing is it’s a deli, and that was my main thing,” Justus said.  “I want my customers met pleasantly. And I want them to leave with a smile.” 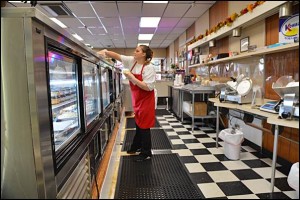 That’s pretty evident as soon as you walk in. There’s a comfy, scrubbed-clean feel to the new deli. This is definitely old school Hamtramck, done with just the right modern touches.
In fact it’s so seamless from the old deli that Detroiter Octavia Jones, a woman of a certain age, didn’t even notice it was a totally new eatery.
“Every time I came to Hamtramck, I would eat here,” she said. “It looks good, and the soup is good.”
As a longtime resident and former Holbrook Elementary School and Hamtramck High School student who grew up when the Jos. Campau strip was still thriving, the 51-year-old Justus also knew what was missing.
“I was raised in Hamtramck,” Justus said. “I know when it was booming, and I know what was there. I said to my wife, ‘It’s turning into Chene Street down here. Where’s everybody at?’”
So, a stroll down Campau last year that brought the couple to the site of the former Kowalski’s deli came to represent an opportunity for Justus, his wife, Sliwka, and Hamtramck residents.
“I want to bring it back,” Justus aid. “That’s my goal — to get Hamtramck out of where it’s at.”