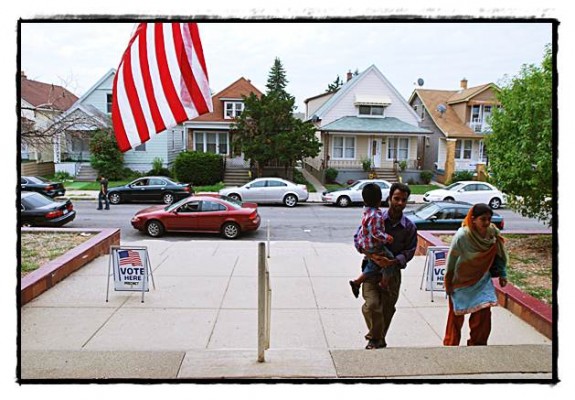 By Musharraf Ali
Special to The Review

Bangladeshi-American voters in the Hamtramck and metro area are getting special attention this election season.

The Michigan Bangladeshi American Democratic Caucus (MI-BADC) has launched an awareness drive for voters, and members of the caucus will be on hand at polling precincts for the Nov. 6 General Election.

The caucus has a couple of concerns: The first is to make sure voters know this is a presidential election, and to make sure those who are eligible to vote but haven’t registered yet know they have until Oct. 9 to do so.

The project will pay close attention to those who will be at least 18 years old at the time of the election as well as seniors who have passed on registering.

The voter awareness effort came about after the BADC met recently at a Conant restaurant where a cross section of local leadership from the Bangladeshi community was present.

Those attending said they were pleased that Hamtramck is now offering ballots in the Bengali language.

A number of volunteers will be fanning out in the Bangladeshi community to promote voter awareness. BADC stressed its effort is non-partisan.

To be eligible to vote in Hamtramck you must be:

• a U.S. citizen
• at least 18 years of age by election day
• a resident of Hamtramck

(Editor’s note: All newly-registered voters in Hamtramck are cross-referenced to the Hamtramck Income Tax Department. Hamtramck has a resident income tax.)