Between the lines … Looking back at the Tigers of 1968 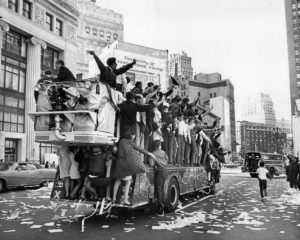 This past week was the 50th anniversary of the 1968 Detroit Tigers World Series win. In downtown Detroit, there was widespread spontaneous celebrations. In Hamtramck, not so much.

By Charles Sercombe
This week marked the 50th anniversary of the Detroit Tigers clinching the 1968 World Series.
For those of a certain age, the day – Oct. 10 — is forever ingrained in our memory.
Hamtramck resident John Kovach recently saw an exhibit about the 1968 Tigers at the Detroit Historical Museum. That exhibit is now over, but take Kovach’s word for it – it was amazing.
That year produced several 50th anniversaries. It was most notable for the murders of Dr. Martin Luther King in April and a few months later of Robert Kennedy, who was seeking the Democratic nomination to become president and stood a good chance of seeing that happen.
And then there was the infamous 1968 Democratic National Convention which turned Chicago upside down. Outside the convention hall, thousands of young people protested the Vietnam War.
Chicago authorities didn’t take the protests lightly, and the skirmishes outside blew up. An official inquiry into the matter laid the blame on the over-the-top force by Chicago police, and even called it a police riot.
In Detroit, there was still plenty of tension lingering from the devastating rioting the year before. At the time, the Detroit Riot of 1967 was the nation’s most destructive on record.
The 1968 Tiger season was seen as a healing for Detroiters – well, at least the beginning of a healing process. The day the Tigers won, which was this past Wednesday at a little after 4 p.m., office workers in downtown Detroit streamed out into the streets and threw a party.
Hamtramck was and still is a 10-minute drive from downtown Detroit, but apparently the hard-fought victory by the Tigers, which didn’t happen until the seventh and last game against the mighty St. Louis Cardinals, didn’t get Hamtramck folks out on the street.
The former Citizen newspaper, which was Hamtramck’s paper of record, hardly gave it a mention the week of the victory or the week after.
Instead the front-page headlines for both weeks had to do with the city becoming the first in the area to offer flu shots, and the possible closing of the city’s only hospital, St. Francis – which eventually did close down and is now serving as city hall.
But deep inside the weekly newspaper there was mention of administrators at Hamtramck High School having trouble keeping some students in school because they wanted to go hear the game. 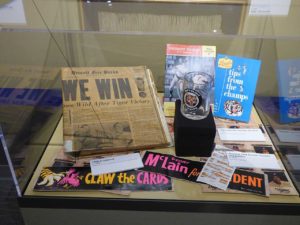 And there was a curious story about a nun who taught English at Holy Name School, located in the East McNichols and Van Dyke area. She remembered having Tigers’ star pitcher Denny McLain as a student at a school she taught at in Chicago.
Sister Marie Rachel remembered the young McLain being an “outstanding” player.
“He would hit the ball straight and far,” she said. “I was always concerned he would damage some window in the neighborhood. I don’t remember if he was a pitcher then.”
Sister Rachel got to see McLain win his 30th game at Tiger Stadium, which was not only historical for baseball, but also for Sister Rachel’s order, the Sisters of St. Dominic, Adrian.
Until then, none of the sisters of that order had been allowed to attend a baseball game.
The Tigers would not experience a World Series win again until 1984.
Unlike the joyous revelers of 1968, the 1984 Tigers “fans” – if you can call them that — erupted into a riot, overturning police cars and setting them on fire.
Some called it a “White Riot” – since most of the people crowded outside Tigers Stadium were suburban white fans.