Big Bikes And Even Bigger Hearts 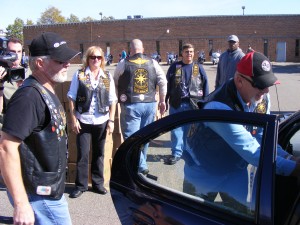 When most people think of bikers, they picture mean guys with nasty attitudes. But that stereotype only makes up a fraction of motorcycle riders. The rest are decent, friendly and caring — a lot like the members of the STAR Touring and Riding Association.

STAR is a non-political, non-confrontational riding association with a focus on family, fun, camaraderie and riding. Recently, the Michigan chapter of STAR partnered up with Feed the Children (an international, nonprofit relief organization that delivers food, medicine, clothing and other necessities to people who lack essentials) and helped provide aid to several hundred families in Hamtramck.

Wayne County was one of two counties in Michigan chosen by the Office of Volunteer Services in Lansing to receive the STAR/Feed the Children aid. Over the past month, 400 vouchers were distributed by Friendship House, Peoples Community Services, Highland Park Head Start and ACCESS to families in need of assistance. People from Wayne County’s three Cities of Promise, which Hamtramck is one of, were eligible to obtain the assistance.

Last Saturday, those who received the vouchers were able to pick up their aid at the Department of Human Services office on Denton St. Each voucher was good for a box of food, a box of hygiene products, and a gift box from Avon. The members of STAR created a path through the parking lot that enabled them to quickly disperse the boxes to several cars at once.

The money to pay for the aid distribution came from the members of STAR. Jay Reynolds, Oxford chapter president and International STAR Samaritan, explained that STAR is the fifth-largest contributor to Feed the Children, even with competition from major organizations like the NFL, NBA, and MLB.

“We try to do this as much as we can so we can show people that all motorcycle groups and associations aren’t bad, and that we do care,” said Reynolds.

The whole operation cost between seven and eight thousand dollars, not bad considering that figure pays for the purchase, packing, shipping and distribution of aid for 400 families. But it’s not the only thing the organization does. The group also spearheads Operation Good Cheer, a program designed to help provide Christmas gifts to needy children in the state, as well as playing host to many local and regional events that cater to the specific needs of specific areas.

Overall, STAR seeks to provide a safe and healthy outlet for its members while at the same time bettering the community around them.

“The thing about these guys,” says Tom Neil, Michigan State Director of STAR, “ is that they are helping people they don’t even know. And that’s important, because it truly shows just how much they care.”