‘Blowout’ loses much of its wind 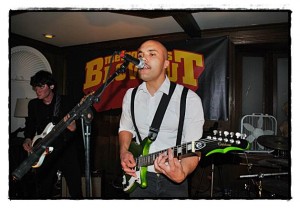 Could this be the beginning of the end of the Hamtramck Blowout?

This year’s attendance seemed to be down by half, some said, and there is plenty of blowback coming from bar owners and fans of the music festival.

The reason for the dramatic downturn, many said, was that festival organizers, The Metro Times, expanded the event to include Ferndale.

“That’s what happens when you split it in two,” said Mikel Smith, the owner of Detroit Threads.

Smith sold wrist bracelets for the Blowout and said that in past years he would have a line of people out the door waiting to purchase them. This year, he said, there was one 10-minute rush.

“The rest of the evening there were just stragglers,” he said.

Metro Times Publisher Chris Sexson told The Review that attendance was indeed way down this year.

“Spreading the bands over two weekends, we expected it to be down,” he said.

Sexson denied there is a plan to move the festival out of Hamtramck to Ferndale, which is what some in town believe is in the works. Sexson said the expansion was needed to bring in more revenue. He said turnout in Hamtramck has been trending down in recent years.

“There has to be evolution,” he said. “This year we made a bold move. We just want to keep it going.”

Cathie Gordon, who owns New Dodge Lounge and is a city councilmember, said she was offended when Sexson told the council the festival was expanding into Ferndale.

“We’re hungry, we need this festival. Ferndale doesn’t,” she said.

Sexson also stirred up some resentment in a quote he gave to the Oakland Press. He told the paper that one reason he included Ferndale is because “… I’ve found, even among some of the younger music and creative people, that some people don’t want to go down there, the same as some people might not want to go into downtown Detroit. It’s just outside of their comfort zone.”

In response, the owner of Lo and Behold, a used record and book store on Jos. Campau, is holding his own music festival tonight (Friday, May 4) called “How I learned to stop worrying and love Hamtramck.”

“For the performers not accepted to play in Ferndale,

“For people who want to see good bands play for free and need not the hassle of security guard scrutiny over overpriced bracelets,

“For those of us who remember when it was called the Hamtramck Blowout and want it to stay that way,

“For those of us who played over the weekend to a crowd divided cuz half the normal attendance decided not to ‘step outside of their comfort zones’ and stay in the suburbs until the following weekend,

“For those who want to keep this party a party and not an uptight business venture for those north of the border,

“For those of us who feel a responsibility to our community and carry too much love and pride for what little we have no matter how f***ed up or weird it might be to people who probably will never understand anyway,

“I encourage Hamtramck to keep this party here regardless if the name’s Blownout of town or not, we’ve hosted it and will continue to do so.”

“We’re just trying to save the festival,” he added.

5 Responses to ‘Blowout’ loses much of its wind