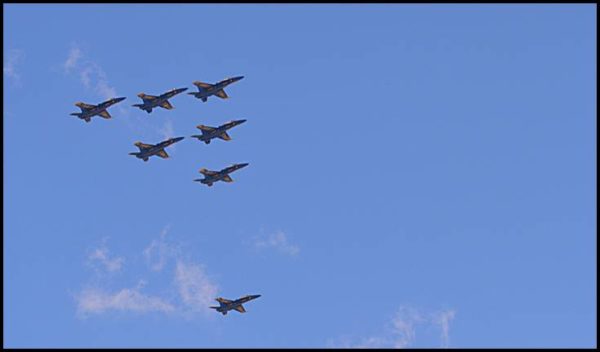 By Charles Sercombe
Well, that was cool.
The famed Blue Angels did a flyover in downtown Detroit Tuesday morning, and they made a turn right over Hamtramck.
The PNC bank parking lot on Caniff Ave. proved to be a good viewing station as the planes seemed to fly almost directly above before heading back downtown.
The flyover was in honor of hospital frontliners. The Blue Angels have been performing flyovers of cities that have been hardest hit with COVID-19.
It is being called “America Strong” – a show of thanks to those working in hospitals.
Their flight plan started from Washtenaw County then to downtown Detroit and then headed to Henry Ford Hospital on West Grand Blvd.
The U.S. Navy seven F/A-18 Hornet aircrafts continued by looping back down and over Hamtramck, and then out to Eastpointe, Warren, Sterling Heights, over to Clinton Twp., headed south over St. Clair Shores and ended at Metro Airport.
The Hamtramck portion of the flyover, which took place around 11:45 a.m., lasted less than a minute. The total flight time was 21 minutes.
While some folks across the country enjoyed the show, there have been critics who complained that the cost of the flyovers is a waste of taxpayers’ money – money they say would be better spent on providing equipment and tests to battle the coronavirus pandemic.
Posted May 12, 2020