City issues a warning over lead in the drinking water 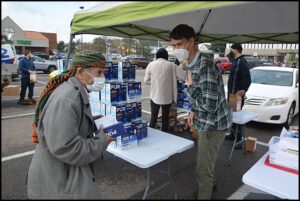 Thousands of residents lined up to receive a free water faucet filter, but there were only 700 to distribute. The city will offer more filters next Tuesday at 11 a.m. in the Hamtramck Town Center parking lot.

By Charles Sercombe
Add Hamtramck to the growing list of Michigan cities with a high lead content in the drinking water.
On Wednesday, the city administration issued a press release saying that a recent test of a sample of 42 houses showed six of them having slightly more lead particles in the water.
According to lab results, those sample houses had 17 parts per billion, just over 15 parts per billion which triggers an alert.
However, the city said there is no need to panic. Residents should first allow water from their taps to run for a little bit before consuming or using for cooking.
For those households that do not have lead service lines, it is suggested that you run your water for 30 seconds to three minutes before consuming.
For those with lead lines, run your water for about five minutes. There is no need to boil your water.
It is also recommended to install a filter.
The city and the Michigan Department of Health and Human Services (MDHHS) teamed up to distribute free filters and replacement cartridges on Thursday (Oct. 21) in the Hamtramck Town Center parking lot.
Thousands of residents lined up but supplies did not last long – there were only 700 filters to hand out. Another distribution will be held this Tuesday, Oct. 26, again at the Hamtramck Town Center starting at 11 a.m.
You can also purchase one for about $100.
According to the city’s press release:
“Lead can enter drinking water when in contact with pipes, solder,
home/building interior plumbing, fittings and fixtures that contain lead. Homes with lead service lines have an increased risk of having high lead levels in drinking water.
“The more time water has been sitting in your home’s pipes, the more lead it may contain. Therefore, if your water has not been used in several hours, run the water before using it for drinking or cooking.
“This flushes lead-containing water from the pipes. Additional flushing may be required for homes that have been vacant or have a
longer service line.”
Going forward, the city will be taking samples from 60 households every six months.
In 2019, the city was ordered by the Department of Environment, Great Lakes, and Energy (EGLE) to replace all lead water service lines in the city.
That project will take several years to complete. In the meantime, about 300 lead lines have already been replaced.
Some of those new lines occurred when Holbrook and Caniff were repaved.
If you would like to have your household water checked, call the MDHHS at (844) 934-1315.
For more information, go to the city’s website.
Posted Oct. 22, 2021