Breaking news … Council forced to re-do its meeting, except one item will be missing 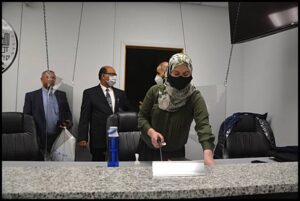 By Charles Sercombe
Tuesday’s regular council meeting (Sept. 13) hit a serious snag.
Only three councilmembers showed up, and it was initially determined that they, along with the mayor, constituted a quorum.
In other words, a bare majority to hold a meeting.
Turns out, that wasn’t true.
It takes four out of six councilmembers, according to the city charter, to go ahead with a meeting. The city charter specifically excludes (per Section 7-09 part b) the mayor when counting heads that qualify as a quorum.
So, that means there needs to be a re-do. In other words, Tuesday’s meeting is null and void.
On Wednesday, the city issued a notice on its Facebook page saying that Tuesday’s meeting lacked a quorum. The city rescheduled the meeting for Thursday, Sept. 15, at 7 p.m.
While the council will be reconsidering the agenda items that need a vote, not all of the items will be reconsidered at the meeting, according to the agenda that you can see on the city’s website.
What won’t be reconsidered at the meeting is the most controversial item, and the one that has divided the council into a stalemate. And that item is whether to grant a tax abatement request for the redevelopment of the old Missant site on Conant, near the county jail.
Those opposed to the deal are Councilmembers Mohammed Alsomiri, Adam Albarmaki and Khalil Refai, and they were the no-shows at Tuesday’s meeting.
Confused?
Join the crowd. There appears to be some political game-playing on this issue.
The council had been putting off a vote on the subject for the past several weeks.
The tax abatement issue will be rescheduled for a vote at the next regular council meeting on Sept. 27.
However, one never knows what could happen at Thursday’s special council meeting.
Posted Sept. 14, 2022