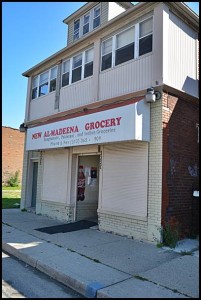 The New Al-Madeena Grocery, located at 2220 Caniff, was one of six Hamtramck markets raided today by federal and state investigators in connection with food stamp fraud.

By Charles Sercombe
On Tuesday morning, federal and state investigators raided six Hamtramck markets, all Bengali-owned, for allegedly participating in food stamp fraud.
Raids were also conducted in other markets in Warren and Detroit.
We will have more details on the matter later in the week, but for now, here is an excerpt from a press release issued today by the US Attorney’s Office:
“ Eleven individuals were charged and arrested in metro-Detroit today on criminal food stamp fraud, announced U.S. Attorney Barbara L. McQuade. …
“Today’s announcement comes at the conclusion of a joint federal and state search and arrest warrant operation that investigated retailers in Hamtramck, Warren, and Detroit who were illegally trafficking in food stamps.
“The charges allege that store owners and employees allowed SNAP and WIC benefit recipients to use their Electronic Benefit Transfer (EBT) cards to exchange their SNAP or WIC benefits for cash. In return, the stores added a surcharge to the recipients’ withdrawal of SNAP and WIC benefits, sometimes in an amount equal to that of the amount of cash benefit received by the recipient. SNAP and WIC benefit funds are transferred electronically directly to bank accounts managed by the retailers. These transactions totaled an estimated $12.5 million dollars during the investigation.
“The following individuals were arrested today and will be appearing in federal court this afternoon:
Al Amin Supermarket, 11920 Conant, Hamtramck, owner Moklasur Mukul, age 36, of Hamtramck;
Bengal American Grocery, 9800 Joseph Campau Avenue, Hamtramck, manager Mohamed Ali, age 38, resident of Detroit;
Deshi Bazar, 12045 Conant Street, Hamtramck, owners Ali Ahmed, age 31, and Nazir Ahmed, age 32, and employee Mustak Ahmed, age 34, all residents of Detroit;
Maloncho Greens House, 12133 Conant Street, Hamtramck, owner Azizur Ullah, age 37, of Hamtramck, and employees Mohammed Chadek, age 44, Mohammed Miah, age 38, and Mohammed Amin, age 38, residents of Hamtramck;
New Al-Madeena Grocery, 2220-2222 Caniff Street, Hamtramck, owner Dilshad Chowdhury, age 34, resident of Hamtramck.
Pay-Less Foods, 11350 Joseph Campau Avenue, Hamtramck, owner Mohamed Ahmed, age 58, resident of Hamtramck;
“Other locations in metro-Detroit were also searched as part of the investigation.
‘Taxpayers in Michigan fund food stamp programs to provide food for the needy, not to create a commodity to be traded for profit,’ McQuade said. ‘We hope today’s charges will deter other merchants to ensure that food assistance programs are not abused.’
‘Michigan families are working harder than ever for every tax dollar,’ said Michigan Attorney General Bill Schuette. ‘Today’s charges should send the message that we will not stand by while tax dollars are being stolen. Enriching yourself at public expense is not only shameful, but compromises the integrity of government and violates the public trust. I would like to thank our state and federal partners for their cooperative efforts to secure justice and fight fraud wherever it is found.’
‘This investigation and prosecution should send a strong zero-tolerance message to those individuals engaged in the practice of defrauding taxpayer funded WIC and SNAP programs,’ said Anthony Mohatt, Special Agent-in-Charge, USDA-Office of Inspector General.
‘It should also serve as a warning to all stores, that participate in the WIC and SNAP programs as vendors, that fraud and trafficking (purchasing those benefits for cash) will be vigorously investigated and prosecuted by the USDA-OIG, the U.S. Attorney’s Office, and all its federal, state, and local partners that have a stake in ensuring that fraud is eliminated from taxpayer funded programs.’
‘Far from being a victimless crime, the offenders in this investigation brazenly defrauded a combined amount of approximately $12.5 million from taxpayer funded programs,’ stated Paul M. Abbate, Special Agent in Charge of the FBI Detroit Field Office.
The press release did not say what the penalty is for the charges.