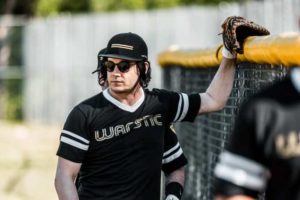 By Charles Sercombe
Baseball is returning in a big way at the historic Hamtramck Baseball Stadium this Thursday (July 11).
Detroit rocker Jack White and his “Warstic Woodmen” will host a charity fundraiser at the stadium starting at noon.
The stadium is located inside of Veterans Park, off of Jos. Campau on the southend.
There is no fee to attend. Seating is up to you – in other words bring a chair or blanket.
Proceeds from the event will go toward the renovation of the stadium. The Friends of Historical Hamtramck Stadium are overseeing the fundraising.
White is also promoting baseball gear – including bats — from Warstic Sports, Inc. He is a partner in the company along with former Tigers second baseman Ian Kinsler.
The stadium was once home to the legendary Detroit Stars, who were part of the Negro Baseball League in the 1930s.
That was back when African-Americans were not permitted to play in the all-white Major League Baseball.
Over the years, the stadium fell into disrepair. For many years, the stadium’s history was not known — until local folks did a little digging, and discovered its historical significance.
It has since been officially designated as a Michigan historical site. A plaque stands in Veterans Park that recounts its past.
One of the Detroit Stars’ leading players was Norman “Turkey” Stearnes. Stearnes is deceased, but his daughters, Joyce Thompson and Rosilyn Brown, will be on hand for Thursday’s game.
They will sing the national anthem to start the game.
Stearnes’ granddaughter, Vanessa Ivy Rose, also will take part in the action, playing in center field for the home team.
Jack White is now based in Nashville, and is on tour with The Raconteurs.
Bandmate Brendan Benson will also be playing.
White is no stranger to helping out with the renovation of the Hamtramck Stadium.
He kicked off a recent online fundraiser for the Friends of Historic Hamtramck Stadium by pledging $10,000. That led to others pitching in over $50,000, and that turned into a double play when the Michigan Department of Economic Development Department provided a matching $50,000 grant.
July 9, 2019