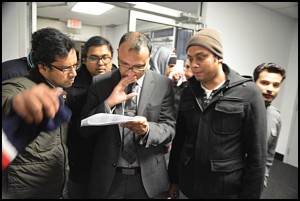 Hamtramck attorney Ruhul Mumen (center), who identified himself as an election challenger, looks over the Hamtramck election results in Hamtramck City Hall Tuesday night. Mumen threatened to “file” for having his photograph taken by a Review reporter.

By Charles Sercombe
Tuesday’s School Board election results are in, and we have some new faces on the board, and two current boardmembers are now kicked off.
In the regular six-year term, the three top winners, in order, are: Evan Major, Mohammad Huda and Dennis Lukas.
Huda’s residency status came into question last week following an investigative report by The Review. He owns a home in Warren where he claims a 100-percent Homestead tax exemption. To claim that exemption, he has to own and occupy it, according to state law.
He also, according to his voter registration record, claims to be a resident of Hamtramck.
Warren’s Assessment Department said it will be investigating Huda’s Homestead status claim. He could be responsible to pay up to 18 mills in school taxes that he was exempt from paying for up to the last three years.
Incumbent Alan Shulgon was knocked out of this race.
In the partial term with four years remaining, the sole winner is Ataur Khan. Khan is an unknown in Hamtramck political circles and did not return a Review candidate survey on school issues.
Incumbent Eric Burkman was knocked out, coming right behind former city councilmember Cathie Gordon.
In the partial term with two years remaining, former public schools employee Jackie Starr won.
A total of 3,702 votes were cast.
Here’s the breakdown of the election results:
Six-year term:
Saad A. Almasmari, 803
Mohammad Huda, 1,268
M. Alwey Hussein, 588
Dennis Lukas, 1,222
Evan Major, 1,334
Anam Miah, 1,177
Nasir Sabuj, 1,019
Alan Shulgon, 986