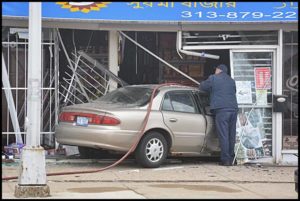 Firefighters use a power saw to free a car that crashed into Surma Bazar market Monday afternoon on Jos. Campau, located just north of Caniff.

By Charles Sercombe
A driver sped through a red light this afternoon at Jos. Campau and Caniff and crashed into a Detroit patrol car, and then ricocheted through the front of a Jos. Campau market.
There were no apparent serious injuries, and the driver was arrested at the scene.
There was no immediate information from the police department about the driver’s identity or what charges he will face.
Hamtramck School Boardmember Maggie Srodek told The Review that she witnessed the accident as she was waiting to turn southbound on Jos. Campau at about 1:30 p.m.
Srodek said the driver was going northbound on Jos. Campau “at a high-rate of speed” when he hit the front end of the police car, and then careened into the Surma Bazar market, located across from PNC Bank.
The driver managed to get out of the car he was driving, and although he seemed dazed, Srodek sensed he was going to run away. 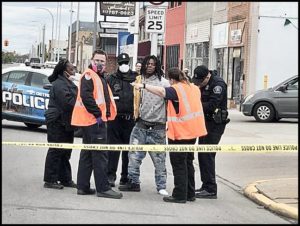 Police officers apprehend the driver of the speeding vehicle. Photo by Maggie Srodek

Srodek immediately pulled over after the accident, and first checked on the Detroit officer’s condition. That’s when she noticed the driver was out and looking like he was about to run.
Srodek, who is licensed to carry a concealed gun, took out her 9mm handgun and ordered him to hit the ground.
“I was screaming at him to get down on his knees,” Srodek said.
The driver complied.
“I made sure he could see my gun,” Srodek said.
The officer in the patrol car that was hit then handcuffed the driver. Both were taken away by ambulance.
Amazingly, no pedestrians were in front of the market at the time of the crash.
“Thank God no one was out walking,” Srodek said.
According to witnesses, the owner of the market was in the store but was not injured.
Firefighters had to cut away metal framing of the building to free the car. 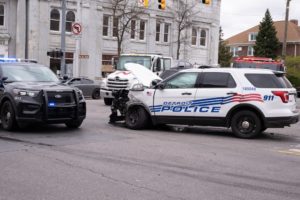