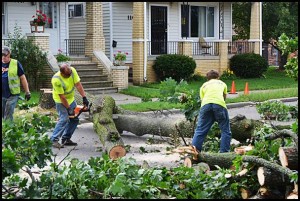 No more Hamtramck trees will be coming down this week and weekend.

Acting City Manager Kyle told The Review on Wednesday afternoon, after the paper went to print, that he is investigating whether some trees were erroneously removed.

Tertzag said he received complaints from some residents who said there were trees removed that had not buckled any sidewalk slabs. However, trees that are infested have been taken down.

He said until recently, he had not received complaints about trees at specific addresses.

Those complaints finally came into his office, he said.

The calls he received over the weekend, which were just a few, were only from people saying they were against removing trees in principle. Tertzag had insisted that trees that caused damage to sidewalk slabs must come down to prevent trip and fall accidents. 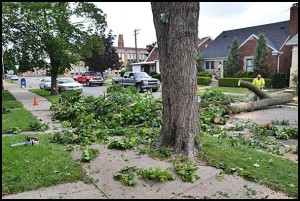 Trees are being removed that have caused sidewalk slabs to buckle up.Does this tree on Gallagher look like it caused damage to the sidewalk? It was removed on Saturday.

Tertzag added that Emergency Manager Cathy Square is in agreement with suspending the removal of trees. He added that if anyone wants to dispute the reason for a tree that had been removed or is slated to be removed to call him with the location of the tree question.