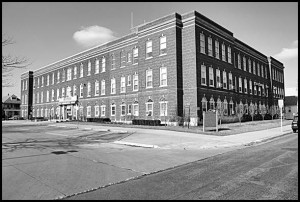 By Charles Sercombe
Are Hamtramck’s police and fire departments too big? Too small?
As city officials tackle the upcoming budget shortfalls, the state told City Manager Kathy Angerer it will pay for a study to find out if those departments are “right-sized.”
At a recent city council meeting regarding the upcoming budget, Angerer said the study will “help create options for us.”
The city has already put out bid requests for the study, and the deadline for companies to respond is a couple of weeks away. The cost of the study is not known yet, but state officials have assured Angerer they will pay for it.
It’s also unknown how long the study will take.
The way things are going for the city – budget-wise – it needs options.
Now.
The city is facing some devastating blows to its budget in the coming year.
On top of the list is the likely closing of GM’s Poletown Plant, which provides about $850,000 a year to the city in lieu of paying property taxes.
And as we have reported before, here is a list of what else is looming:
o Next year’s budget will not include a federal grant that currently covers the salaries of firefighters. The city had received this grant for the last several years. Angerer said the city received $575,000 for the 2018-19 budget year from this grant, but she noted the amount changed from year to year.
Angerer said the city no longer qualifies for the grant because the award is only for cities with volunteer departments or cities that are adding additional employees.
o A long-standing Community Development Block Grant has been reformatted, which will result in a loss of $100,000 per year that went to pay for code enforcement.
o In three years, Wayne County is expected to transfer prisoners from its Hamtramck jail to the new one being built in Detroit. The upshot: A loss of $1.1 million a year.
o Over the next seven years, city employee payroll will increase by 7 percent, and the total cost of their health insurance will go up by 30 percent. That will cost the city hundreds of thousands of dollars more.
o According to Angerer, if the city does not make adjustments to its budget, there will be an $11 million deficit by 2023. The city’s annual budget is about $16 million.

The city currently has a budget surplus of $6 million, but in order to get next year’s budget to balance, the city will have to dip into that. Next year’s budget begins July 1.
Hamtramck has a history of falling into financial trouble. The state has twice stepped in and appointed an emergency manager to take control of the city’s finances.
Local control was returned four years ago.