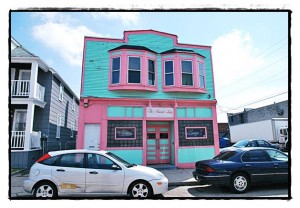 The city of Hamtramck is due for its annual facelift.

The yearly façade grants have been doled out by the Downtown Development Authority, and this year it is proving to be more far-reaching into the community.

Work has already begun on the former Citizen newspaper building on Jos. Campau, one of the eight locations chosen for this year’s Façade Improvement Grants.

The front of that building has been posing a danger for several months. The bricks have been buckled, and it looked like the front was about to collapse.

Construction is expected to begin on three other locations by the end of the month.

The grants are funded by the federal government through its Community Development Block Grant program.

“The goal is to try to maintain and restore these buildings to their historical look and significance,” said Darren Grow, the DDA’s director.

The DDA has been awarding these grants since 2007, with the primary focus on downtown. But this year, things are different.

With enhanced involvement from the City Council and Jason Friedmann, Hamtramck’s director of Community and Economic Development, this has become a citywide program.

As a result, there have been grants awarded to locations throughout Hamtramck, not just in the Jos. Campau business district.

For example, there are façade grants for the Painted Lady bar on Jacob St., and for Dale’s Party Store on Holbrook. Work is expected to begin at both businesses by the end of April.

Another project on Carpenter St. is awaiting approval from the State Historic Preservation Office before bids can be solicited, Grow said.

Rounding out this year’s list of recipients of the grant are MGM Pawn Shop, a soul food restaurant called Flavor, The Yoga Suite and the former Flowers By Us, all on Jos. Campau.

Grow said all the work is expected to be completed by the end of June.