Business owner has plenty of trash talk over neighbor 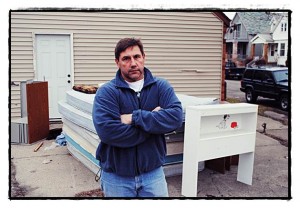 They say one man’s trash is another man’s treasure. Just don’t expect that sentiment from Sean Kowalski.

For the past 15 years, Kowalski says he has had problems with the inhabitant of a stand-alone garage located at the intersection of Bernard St. and the alley behind Holbrook. According to him, the structure’s occupant, Lutheran Social Services (LSS), has failed to maintain the property and has repeatedly left large piles of trash and other debris lying on the side of the building.

“I have always shoveled, mowed, cut ghetto palms, swept, etc.,” he says. “When they would dump big piles of donated crap they didn’t want, I’d lug it to my dumpster. Frankly, I’ve had enough.”

As a co-owner of Café 1923 and the owner of a nearby home – both of which are situated near the garage in question – Kowalski said that after years of getting the runaround from LSS he finally grew tired of the problem and decided to alert the media.

When LSS was initially asked about the issue, a woman by the name of Judy who answered the phone denied having any knowledge of the building. She also said she was unaware of the issue until this week.

“We don’t have any facilities in Hamtramck,” she said. “In fact, other than a voicemail I heard this morning, this is the first I’ve heard of any problem.”

However, Kowalski insists that is not the case. He says that in the years during which LSS never mowed any grass, shoveled any snow from the sidewalk nor made any efforts to clean trash from the property, through the course of trying to rectify the situation he learned that the building was operated by the Refugee Services division of LSS.

Upon calling the head of Refugee Services, Belmin Pinjit, The Review was told by him that it was “not possible” that the building had been a source of problems for the past 15 years, stating that their Refugee Services had not been around for that timeframe.

However, he did concede that the building had been in use since he had come to the country as a refugee in 1996. He also contended that the structure has been unused since 2006, when another facility was obtained in Madison Heights, and that in 2007 all remaining furniture that could be salvaged was moved to the Madison Heights location.

Additionally, Pinjit claimed that the garage has been locked for the last four-to-five years, and that any trash or debris left in the area was a result of a failure by Waste Management to pick it up. He said that his organization is sometimes called to collect donations from people who are actually just trying to get some furniture removed from their houses, and the main problem is that when his organization leaves a pile for Waste Management sometimes others pick through it and leave the area a mess.

Regardless of the problems of the past – which Pinjit said he was unaware of – Pinjit said that if the trash was not picked up this weekend he would see to it that the debris is removed. He maintained that Kowalski could have contacted him directly and added that after seeing the pictures Kowalski took of the trash pile, he noticed an inordinate amount of tree branches on city-owned property. He said he was told by Kowalski that the city was broke and that individual residents took it upon themselves to clean up the city. Upon being told of the Clean Sweep by a Review reporter, Pinjit agreed to join in.

Though the situation appears to have been diffused, Kowalski says he won’t be satisfied until the structure no longer poses a problem. For now, he’ll be keeping one watchful eye on the property and another on Lutheran Social Services.

“I am shocked and appalled that an organization which claims a vision of ‘Communities of service that meet the needs of people, upholding human dignity, advocating equality and justice’ willingly treats my neighborhood with such glaring disrespect and injustice,” Kowalski said.