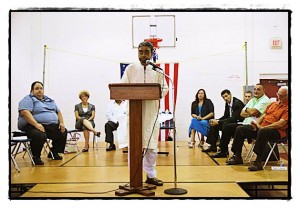 Last week we left off at “Meet the Candidates Night” right before the question and answer section.

The questions were submitted by audience members. Here are some of the highlights of that portion of the night.

On the question of what changes should be made to the city, Roger Lamm would come up with “programs” to create business discounts so “they can get a foothold” in opening up.

Incumbent Councilmember Cathie Gordon, who is the only incumbent seeking re-election, said there needs to be “consideration” for taxpayers in the form of a tax amnesty.

As for city officials, she said they should be held “accountable.”

“We are not above the law,” she said.

Anam Miah is attempting for the second time to win a seat on council. He said he would work with the Police Department to make the city’s side streets safer, redevelop the downtown business district, lift the tax burden from residents and hold city officials “accountable.”

Apparently “accountable” was the magic word of the night.

Veteran candidate Susan Dunn-Rahdar said she’d turn the former Shopper’s World building into a wellness center for veterans. She would also take over a parking garage belonging to American Axle & Manufacturing to allow for public parking.

She would also have a tram transport people from the parking structure to the business district to boost shopping.

Ian Perrotta said the city needs to bring in more people, which he would do by starting up an advertising campaign, something as simple as billboard along I-75.

In the heavily-congested stretch of I-75 north, between Seven and Nine Mile, he suggested on with a message of: “If you lived in Hamtramck, you’d be home by now.”

Steve Shaya says it’s all about the basic things: clean streets and alleys and safer neighborhoods.

And to do that, he added, the city needs to crack down on code enforcement.

Former Councilmember Robert Zwolak continued on that theme of code enforcement. He was the only candidate to add a little theatrics to the evening by knocking on the lectern, to imitate a knock on the door, to stress that code enforcement starts with inspectors knocking on doors to tell homeowners and residents what needs to be fixed up.

He also wants to publish a quarterly newsletter for the city to keep residents informed about city codes and other matters.

What’s the opinion of our candidates regarding the city’s proposed Master Plan?

Oh, if ever there were a test of knowledge, this question was sure telling — as in how many of the candidates even knew about the Master Plan.

Candidate Mohamed Hussain was at least honest: He admitted he had not seen it.

Later in the meeting he had another moment, saying he couldn’t answer a question because he had a headache.

Councilmember Gordon said she supports the plan, but didn’t get into specifics.

Candidate Miah said unless there is leadership and the community is behind it, the plan is just a plan.

Candidate Dunn said she has seen the entire plan, but senses people don’t take it seriously. People, she said, are losing “motivation.”

Perrotta said “it’s about time the city has a Master Plan.”

He pointed out that a Master Plan is key to winning grants. Hamtramck hasn’t had an updated Master Plan in many years.

Perrotta admitted he hasn’t read the document from “front to back,” but he doubted any of the other candidates have.

He said one part of the plan he disagrees with is tearing down the baseball grandstands in Veterans Memorial Park. There is good evidence that the grandstands were once home to the Negro Baseball League.

Shaya said the plan identifies Hamtramck well, and called it a “piece of work. It’s nice.”

Zwolak said the plan is a “good guideline” but pointed out that Hamtramck is not Ferndale or Royal Oak.

(Editor’s note: Since when did people start mistaking Hamtramck for Ferndale or Royal Oak?)

Zwolak went on to say that Hamtramck is a “non-conforming” city, and that the plan has to be flexible.

(Editor’s note: Hmmmmm … “non-conforming” city … that may explain the city’s unofficial motto: “Only in Hamtramck.”)

Zwolak also said he’s concerned the Master Plan will become an excuse “to not getting anything done.”

By question number three, the evening was beginning to drag. There was a noticeable uptick on those hitting the snack table. Those chocolate chip cookies sure were popular.

The third question: What would you do with the vacant, or soon to be totally vacant, American Axle factory site?

Candidate Miah spoke like a seasoned politician, saying there is no “magic solution.” But he said what needs to be done is to identify what it could be used for: a different type of manufacturing or reinvented for the service industry.

(Editor’s note: Before we continue, it should be pointed out that the plant is privately owned and at this point, there is not much the city can dictate what can be done there.)

Candidate Dunn came up with an idea that just a few years ago probably would have gotten her arrested, well, not exactly, but certainly booed at.

Her plan: turn the plant into a medical marijuana growing facility.

Perrotta stepped up next and agreed with that plan, but he also suggested perhaps the most obvious of plans: “I think something should be manufactured.”

That’s a notion, the manufacturing angle, that Zwolak picked up on. He took it a step further by saying the city needs to approach our local congressional representatives to “make it do-able … for manufacturing to come back.”

Let’s see … a parking garage, manufacturing, medical marijuana … what could possibly be next?

Ah, leave it to Councilmember Gordon.

But not just any basketball.

Gordon said there is talk of the Pistons relocating back into the city, and the plant site could be torn down to make way for a new arena for the Pistons.

Manufacturing, she said, is “done” in America.

“You have to think creatively,” she said.

But is it possible to name the arena something other than a bank name?

How about a reference to the Chuck Daly era: “Bad Boys Arena”

One Response to Candidates answer your questions