Candidates Give It Their Best Shot … 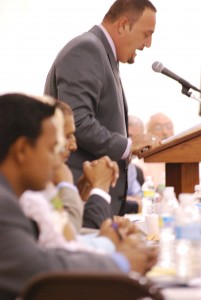 Hamtramck’s mayoral and council candidates didn’t exactly stand out at Wednesday’s candidate forum, but they also didn’t put a foot in their mouths.

And if the election could have been held at the “Meet the Candidates Night,” council candidates Kazi Miah and Darlene Swint would have been easily swept into office.

But it wasn’t election night and the two will have to further slug it out in the Aug. 4 Primary Election.

Here are some of the highlights of the night:

A running theme for some of the candidates was how bad things are in Hamtramck. Hearing what they had to say, you’d think Hamtramck was rampant with crime and in the crapper. Here’s a sampling.

“Help me to help you. Let’s stop the rapid decline of our city,” said Steve Shaya, who is running for council.

“The big thing is, a balanced budget. Next year will have problems,” said Alana Shulgon, running for re-election to council.

“I don’t feel safe,” said Anam Miah. “Let’s take this city back to where it was.”

At least one candidate, Mohammed Hassan, apparently wants to do a total re-write of city government. He said wants to eliminate the city manager because of the expense of the office and rewrite the city charter.

File this under “a boy can dream.” Council candidate Kazi Miah said he’s wanted to be a public servant “since I can remember.”

Phrase of the night. Every once a while, candidates will come up with what they hope are memorable quips. Steve Shaya said it’s time to change from “reactivity to proactivity.”

And back to Shaya’s line, “Help me to help you.” Kind of reminds you of the pop band Cheap Trick and their super smash hit: “I want you to want me.” Rock on, Steve.

And speaking of things musical, keep saying Kazi Miah over and over you might start saying it to the tune of “Momma Mia.”

Sometimes in the effort to coin a phrase, or to resurrect one, something gets lost in the translation. Remember when President George Bush (the first) said, “Read my lips, no new taxes”?

Well, that well-worn phrase got mangled a bit by mayoral hopeful Abdul Algazali, who said: “Read my lips, tax increase.”

The brou-ha-ha from the Detroit City Council—where some members required payments, bribes, campaign donations, you name it—spilled over into this election. Robert Zwolak, a perennial candidate who is seeking the mayor’s job, promised an end to the “pay to play” game. He didn’t say who is getting payments – legal or otherwise – but certainly cast suspicion. Fair play? Well, this is politics after all.

No one likes to get traffic tickets, especially elected officials, it seems. Abdul Algzali promised to end the practice of traffic patrolman “hiding” on the side streets and rushing out to ticket traffic offenders.

Several weeks ago, Algazali was ticketed by a traffic officer for speeding.

When mayoral candidate Taras Nykoriak answered a question about how to expand the Dequindre Cut bike trail, which is supposed to come into Hamtramck, he said: “Is it better to have a bike path or two more cars policing the city?”

Kwik has worked on making the trail a reality for several years.

Nykoriak gets credit for not missing a beat in his retort: “Then you can pay more taxes.”

Next week, some more gems from the mouths of would-be elected officials.