Candidates line up for election 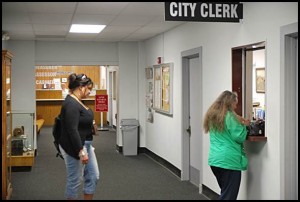 School Boardmember Hedy Shulgon files her petition to run for city council in the August Primary Election. However, she later withdrew from the race despite paying $100 to file. Council candidate Beverly Tran is standing behind her.

Editor’s note: This story was updated from Friday’s publication

This could be one of the more exciting elections in recent years.

A total of 19 candidates have lined up for the Aug. 6 Primary Election. The final list of candidates was released at the end of the day on Friday – the last day for any of the candidates to drop out.

So far, this is how the candidates have lined up:

(School Boardmember Hedy Shulgon filed for the race just before the petition deadline on Wednesday and paid $100 for the filing. She withdrew from the race, however.)

There is one two-year seat on the ballot because Councilmember Cathie Gordon had to resign from the remainder of her term in order to run for mayor. She doesn’t actually vacate the seat until Dec. 31.

Councilmember Abdul Algazali also decided not to seek re-election and instead opted for a second try at the mayor’s position. He did not have to resign from office because his council term runs out on Dec. 31.

The last time he ran against Mayor Majewski, four years ago, he came pretty close – some 124 votes behind.

Until several weeks ago it was anyone’s guess whether Majewski would seek a third term. She had been telling people she was undecided.

It was also rumored that Jankowski was considering another run for mayor. He served one term as mayor until Majewski beat him eight years ago.

If the name Andrea Karpinski sounds familiar, that’s because her father, Joe Karpinski, once served on city council. His one term on council in the mid-1990s was colorful.

To say that he didn’t get along with fellow Councilmember Gary Zych would be an understatement. In one notorious incident, Zych accused Karpinski of dumping a small waste can over his head in a heated argument during a closed meeting.

Karpinski denied it, and since the meeting was closed to the public no one owned up to seeing the incident, even though fellow councilmembers were right there during the meeting.

Also joining the election from the city hall ranks is Downtown Development Authority Director Darren Grow. Grow is an appointee, not an elected official. He is also the former co-owner of the Belmont Bar.

And let’s not overlook that The Review newspaper – Hamtramck’s paper of record – has two of its own involved in the election. Publisher John Ulaj, who stepped down from the position of publisher to run, is trying once again to win elected office.

He last ran for office against former City Clerk Ethel Fiddler in the 1990s.

Ian Perrotta has been a reporter with The Review – on and off – for about four years.

For political junkies in town, this election offers plenty of drama. What intrigues some observers is guessing how powerful the Bengali voting bloc has become. The city council has two Bengali-Americans on the council as well as Yemeni-American Abdul Algazali.

For decades the council was the property of Polish-Americans. Hamtramck’s ever-evolving ethnic change-up has made the council more ethnically diverse in recent years.

Could there come a time when there are no longer any Polish-Americans on the council? This election could very well spell the future of what’s to come.

3 Responses to Candidates line up for election