Candidates will have their night to win voters 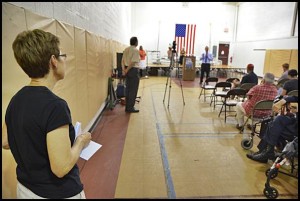 Candidates will get a chance to convince voters to vote for them at a candidate forum to be held on Oct. 24.

Still haven’t made up your mind about this year’s election for mayor and city council?

Set aside Thursday, Oct. 24 for a Meet the Candidates Night at People’s Community Center at 8625 Jos. Campau, starting at 7 p.m.

The 3c7 Block Club is organizing the event. Candidates who have not yet been contacted to participate can call Heather Martin at (313) 525-5090, or email her at: heatherm1969@yahoo.com.

This election is a unique one for Hamtramck. There are four seats in city council up for grabs. The only council incumbent running is Mohammed Hassan.

But Mayor Majewski may have a fight on her hand. She trailed Algazali by 62 votes in the primary election.

Four years ago she beat Algazali by 142 votes in her second bid for re-election.

Algazali almost got kicked off the ballot when it was revealed he was behind in paying property taxes for several buildings he owns. As it turned out, he was behind two years on taxes on only one building.

He paid nearly $3,000 owed on the property a week after the primary election when it came to light that he was delinquent.

Hamtramck Emergency Manager Cathy Square and City Attorney John Clark said that after reviewing the matter, Algazali’s delinquent tax issue was an “oversight,” and that he will remain in the election and in office.

Algazali was a no-show at a mayoral candidate forum held before the August primary election.