Caniff is now open for traffic 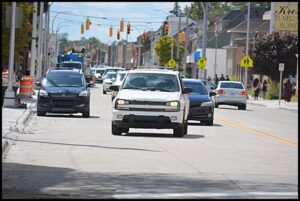 It took all summer, but the reconstruction of Caniff Ave. is now over, and the street is open for traffic.

By Charles Sercombe
Most residents have probably noticed by now that one of the city’s main arteries, Caniff Ave., is once again fully open.
The street had been closed from the I-75 service drive to Jos. Campau Ave. for much of the summer to allow for a total reconstruction.
That project, which was funded by a $1.4 million federal grant, also included installing new water lines and new sidewalks. The city had to kick in $300,000 from its annual state-funded road repair grant.
The job was completed a few days before the Sept. 1 deadline.
That was just in time for last weekend’s Hamtramck Labor Day Festival.
Although the Caniff project has ended, Wayne County will now begin repaving Conant, from Carpenter to Holbrook.
All of this follows the repaving of Holbrook from Lumpkin to Conant, which took two years to complete. Also, Carpenter was repaved by the City of Detroit last year.
The city has already penciled in its street repairs for next year, which include:
 Hamtramck Drive
 Klinger, from Commor to Carpenter
 Fleming, from Caniff to Casmere
 Lumpkin, from Commor to Carpenter
 Yemans, from Jos. Campau to Gallagher
None of the repairs have yet been bid out, so the cost for these projects are not known yet.
Posted Sept. 10, 2021