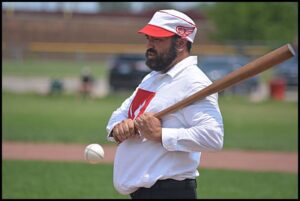 By Charles Sercombe
Is there a better way to celebrate the Fourth of July weekend than watching the national pastime?
For those not of a certain age, we’re talking about baseball.
And specifically, vintage-style baseball, which plays by the rules of the 1860s, which means the players do not use gloves. And it was also a time when it was spelled as “base ball” – two words instead of one.
Hamtramck Stadium once again hosted a vintage game last Saturday. This game featured the Hamtramck Hussars versus the Detroit Base Ball Club.
What is a “hussar” you ask?
Our crack team of researchers (OK, we used Google) said that it refers to a Hungarian calvary soldier from long ago. Apparently, they looked fierce in their get-ups. 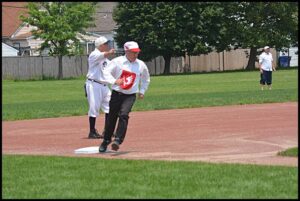 The name seemed to work its warrior magic: The Hussars won 26-7.
The weather cooperated, with not a rain cloud in sight, and temps still bearable before the heatwave descended on Michigan. Two food trucks were also on hand.
The only thing missing was beer, of course, but that would have been against park rules.
(Hopefully, down the road an exception will be carved out for just the stadium area, or, that could be our wishful thinking.)
There was a crowd of about 100 on hand to enjoy watching players catch the ball barehanded, and also dressed up in old-timey uniforms – well, for the most part.
Perhaps the highlight of the day was taking in the ongoing restoration of the stadium, and its rebuilt infield. It’s truly an amazing transformation from just last year – especially considering just how bad the old stadium had deteriorated.
Word is that renovation of the grandstands will soon start. 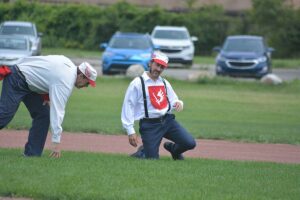 Hamtramck Stadium was built in the 1930s for the Detroit Stars, a team that was in the old Negro League. The Hamtramck Stadium infield is named after one of the Stars’ best players, Turkey Stearnes, who was from Detroit.
His daughter, Rosilyn, was in attendance at Saturday’s game.
There is plenty of historical information out there about the stadium and the league, largely thanks to the Friends of Historic Hamtramck Stadium. Check it out.
There will be another vintage-style game on July 25, starting at 1 p.m. The games are free to attend.
When it comes to good food and great times, Hamtramck has plenty to offer. In this column, we’ll talk about what’s happening at our bars, restaurants and at other events throughout the city.
Posted July 9, 2021