Census volunteers spread the word to be counted 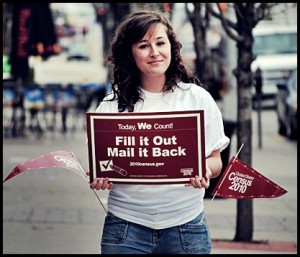 By Charles Sercombe
The 2010 Census is coming to your neighborhood starting this week.
No, we’re not talking about the Census forms that every household across the country is being asked to fill out. Those forms have already been mailed, and if you haven’t filled it out and returned it, the government is asking you to do so right away.
What we’re talking about is a group of students and adult volunteers who will begin walking through Hamtramck’s neighborhoods to plant lawn signs encouraging residents to participate in the Census and to talk with residents about filling out the form.
A lot is at stake for Hamtramck and every other community. The more people we get counted as being part of the official population, the more money the city gets through various federal grants and subsidies.
For every person counted, Hamtramck is in line to receive several thousand dollars over the next 10 years.
A number of other communities are also sending volunteers door-to-door to ensure they receive an accurate count.
The Census occurs every 10 years and is mandated by the Constitution. In recent modern history it’s been a challenge to convince racial and ethnic minorities to participate. Minorities fear that the information they submit will in some way be used against them.
Although it is against the law for the Census Bureau to share information it collects, that fact has always been a hard sell to the public.
In a twist this year, far-right conservatives are encouraging the public to ignore the Census for a number of paranoid or unfounded reasons.
The law requires residents to fill out the Census and any household that does not return the form will be visited by Census representatives. You can be fined $100 for not filling out and returning the form. It’s rare, however, for the Census Bureau to actually enforce the law.
This Saturday, Hamtramck Census volunteers will help spread the word by wallpapering the windows of the former Shoppers World building with messages written in the several languages spoken in Hamtramck to encourage resident participation.
There will also be Census recruiters on hand to take job applications.
According to the Census Bureau’s website, almost 40 percent of Hamtramck’s households have returned their Census form.