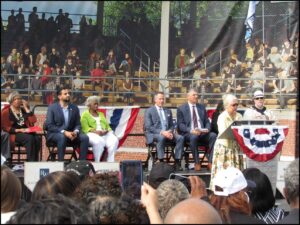 City, county and state officials joined others to celebrate the history of the Hamtramck Stadium, and officially announce funding to pay for the project. The renovation of the grandstands is expected to be completed by the end of the year.

By Greg Kowalski
Special to The Review
A full line-up of heavy hitters turned out Tuesday morning for the official start of the renovations of the Historic Hamtramck Stadium at Veterans Memorial Park.
Speaking at the event, which was attended by about 200 people, was Christopher Ilitch, owner of the Detroit Tigers and numerous other real estate and business holdings, who helped arrange Tuesday’s event.
“The Detroit Tigers are committed to celebrating the extraordinary contribution of the Negro League,” Ilitch said. “This renovation is truly historic.”
The Hamtramck stadium is one of the five remaining baseball stadiums in the nation where the old Negro Leagues teams used to play. It was home of the Negro Leagues’ Detroit Stars for several years in the 1930s.
Among the players who appeared there was Norman “Turkey” Stearns, and the field at the stadium has been named in his honor.
The event was prompted by the recent awarding of an $850,000 grant from Wayne County to help renovate the stadium. It is the final part of a package of grants to make the $2.6 million renovation project possible.
Other grants have come from the Detroit Tigers Foundation, the Ralph C. Wilson Jr. Foundation, the Kresge Foundation, the Michigan Municipal League Foundation, the National Park Service/Department of the Interior, and there have also been contributions from the non-profit Friends of Hamtramck Stadium.
“This renovation is important to me,” said Mayor Karen Majewski, who also spoke to the crowd.
She noted that Hamtramck is the most diverse city in Michigan, and that the stadium gives recognition to the Negro Leagues after years of neglect.
“Thanks to all of you, that vision is becoming a not-too-distant reality,” she said.
Wayne County Executive Warren C. Evans also cheered the project saying that it’s a reminder of the resourcefulness of those Black people who built the Negro Leagues, which was a national major business enterprise.
And, he said, the stadium may spur a greater interest in baseball among kids of color, who in recent years have turned away from the sport, which is known as “America’s Pastime.”
Congresswoman Brenda Lawrence, whose district includes Hamtramck, echoed Evans.
“The stadium is a statement of the resilience of my people,” said Lawrence, who is an African-American.
David C. Egner, president and CEO of the Wilson Foundation, said the stadium “is a place where history and the future collide.”
Among its objectives the Wilson Foundation promotes active and healthy lifestyle projects. He said that playing baseball does that.
“It’s not a luxury,” he said. “It’s a necessity.”
State Rep. Abraham Aiyash, who represents Hamtramck; County Commissioner Martha Scott; and Gary Gillette, co-founder of the Friends of Historic Hamtramck Stadium, also spoke.
“This is the beginning of a new era,” Gillette said.
City Manager Kathy Angerer wasn’t among the official speakers, but she told The Review that the stadium encapsulates the diversity of Hamtramck. “The stadium embodies exactly what we think about when we think about Hamtramck.”
But perhaps Rep. Lawrence summed up the day more succinctly than anyone, when she said, “I feel like I am on sacred ground.”

Greg Kowalski is the executive director of the Hamtramck Historic Museum and is the author of several books on Hamtramck’s history.
Posted Aug. 6, 2021