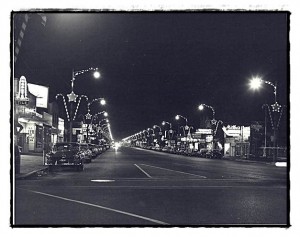 Christmas 75 years ago was surprisingly similar to Christmas today.

The world was in a simmering turmoil, with people looking at a growing enemy threat overseas. And, at home, the nation was slowly crawling out of the depths of an economic disaster.

The Great Depression was worse than anything we have experienced today, but so many of the problems of then still sound similar: Families losing their homes to foreclosure, people desperately seeking help through public assistance, and everyone being concerned about the high costs of just about everything.

But then, like now, there were signs of hope.

The New Deal newspaper on Dec. 23, 1936, captured the feeling well with a front page story under a banner headline: “Santa All Ready to Give City a Grand Christmas.”

The story related: “Greater Hamtramck had to play the true part of the good sport in a couple of lean years of the depression. Many of us cheerily wished everyone we met a ‘Merry Christmas’ when we ourselves looked forward to a depression Christmas. Now we have come to a time when our confidence has returned, when we are all reasonably sure of the future.”

Maybe it was a little too optimistic. In 1936 the Great Depression was easing, but far from over. It wouldn’t finally let go until World War II forcibly brought it to an end.

But you could hardly fault the paper and the people for putting on a happy face at Christmas.

The Great Depression had been brutal, especially in Hamtramck. Most city residents at the time worked at Dodge Main, Ford, or at the many factories that fed the auto plants. Those jobs evaporated when the auto industry withered in the Depression. Hamtramck’s unemployment rate in the early 1930s was somewhere near 60 percent.

By Christmas 1936, there were signs that the situation was improving.

Auto production was up. Stores were reporting increased sales and, in a backwards way, even the crime rate showed things were getting better. In mid-December, the police announced they were assigning a dozen extra officers to patrol Jos. Campau to protect against shoplifters and thieves who stole merchandise from inside parked cars.
The bottom line was that people were spending money again.

Hamtramck had a long reputation for being a caring community. This was shown again that year with the annual Goodfellows newspaper drive. Then, as now, the Goodfellows sold newspapers to raise money to buy gifts for children at Christmas.

Tenerowicz, by the way, was in the midst of a personal scandal, and the New Deal issue that carried the report of his stellar Goodfellow performance also carried the lurid details of his messy and scandalous divorce.

But this was the season of giving, not gossip, and most attention was focused on the holidays.

All over town, clubs and groups were holding parties. The Junior Study Club, the Metropolitan Ladies Auxiliary, Tau Beta and many other organizations were getting into the Christmas spirit with parties, usually held to raise money for the needy.

Most folks went to midnight Mass on Christmas Eve, or to services on Christmas Day. After that they spent the day pretty much as we will this year.

Leona Pilaski’s “Across the Table” social column related that “Mr. and Mrs. William Beltz will spend the day at their own home on Hewitt Ave., playing Santa to their two sons, Freddie and Billy. Not that either of them believe in him. Later in the day they will visit Mrs. Beltz’s mother.”

Enjoy your Christmas today — just like they did then.

Greg Kowalski is chairman of the Hamtramck Historical Commission.