City and school officials have big plans for Veterans Park 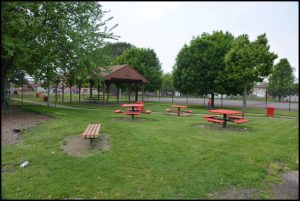 If a multi-million-dollar grant comes through, Veterans Park will undergo an amazing transformation.

By Charles Sercombe
If the stars align right, Veterans Memorial Park could undergo a major renovation.
Make that millions of dollars’ worth.
Plans for the park were introduced to the city council in December, and also to the community last Friday during a dinner presentation sponsored by the Michigan Municipal League.
The plan was created by a Minnesota-based urban planning company, and coordinated by Global Detroit. It was funded by a $800,000 grant from the Ralph C. Wilson Foundation, which has been funding programs to encourage younger people to get more physically active.
City and school officials are also hoping to receive a multi-million dollar grant from the foundation to renovate Hamtramck Stadium, one of only five remaining baseball stadiums built for the Negro baseball leagues that existed back in the early 1900s.
Hamtramck Stadium was built in the 1930s.
The renovation plan also includes the stadium, and further on over to Keyworth Stadium, which is owned by the public school district.
In all, the renovation plan covers a total of 26 acres.
The plan includes:
Creating a “green alley” near Keyworth Stadium.
Creating trail loops that “stitch” neighborhoods together.
Planting “living rooms” in the park. These are social gathering areas that are secluded by plantings.
Creating a “wet prairie meadow.”
Creating a botanical garden.
Funding for the project could come from a variety of public and private sources, but the main source that city and school officials are hoping will come through is a multi-million grant from the Wilson Foundation.
The Michigan Municipal League is the fiduciary for any would-be grants.
The Wilson Foundation has already paid for new artificial turf at Keyworth Stadium, so it’s not a long shot by any means to hope for further funding from the organization.
Feb. 14, 2020