City Attorney says his bills can’t be looked at 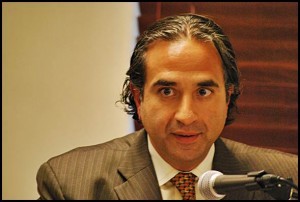 Hamtramck taxpayers, want to know what city attorneys are billing you?

According to City Attorney James Allen, of the Allen Brothers law firm, the monthly bills he submits to the city outlining what cases and issues he worked on and how much he and other attorneys in his law firm received in payment are “privileged” information.

Allen made that claim in his denial to a Freedom of Information Act request made by The Review to get copies of the monthly billings for January and February.

Allen went on to say, in a statement prepared by Allen but signed by City Clerk Ed Norris, that only the city manager and city council can view the billings.

“These communications are privileged and protected from disclosure to third parties. In addition, the information in these invoices are communicated only to high ranking city officials also contain the mental impressions and work product of members of the city’s law firm.”

Allen/Norris went on to say:

“These communications are also privileged and, by statute and common law, not subject to disclosure to third parties. Opening them up to public view, especially in matters involving pending and potential litigation (as well as contemplated commercial transactions) would seriously compromise any attorney’s ability to competently represent the city’s interests and effectively communicate about the work that attorney does, much of which is, by necessity, confidential in nature.”

She added that “it’s impossible” to claim that all of the information is exempt from the state’s Freedom of Information Act.

“You might have to redact some words, but not all of them,” she said.

Councilmember Cathie Gordon, who has been an outspoken critic of Allen, also doesn’t agree that Allen can withhold the information from the public.

“That information belongs to the client, and the client is not the council,” Gordon said. “It’s the city.”

At Tuesday’s city council meeting, Gordon proposed to have Allen’s monthly billings made public, but she received support only from Councilmember Robert Zwolak.

Allen argued that if his billings are made public, opposing attorneys in pending or ongoing cases would be able to read what he has been doing, and use that information to their benefit.

The Review has submitted an appeal to the city’s denial, and as of Thursday, the day the paper went to print, the city had not responded.