City awarded mini-grant to crack down on pedestrian injuries 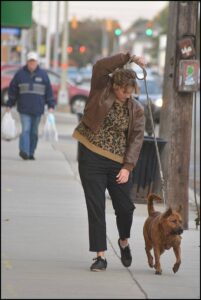 Hamtramck is known as a walkable community, but that comes at a price. The city has a high number of pedestrian-auto injuries.

By Alan Madlane
Hamtramck was one of a dozen, mostly southeastern Michigan cities that were just awarded short-term grants by the state’s Office of Highway Safety Planning.
Others so regaled were the relatively nearby communities of Detroit, Dearborn, Warren, Sterling Heights, Southfield, Farmington Hills, Macomb Township and Pontiac, as well as Flint and Flint Township, and Kalamazoo.
The grants provided a week’s worth of extra law enforcement vigilance to benefit pedestrians, between the dates of Oct. 15-21.
The bad, or sad, news is, that these cities were selected because of their being amongst the highest in numbers of pedestrian-involved serious injury or fatality accidents over the past five-year period.
The stats were actually a bit surprising, in the sense that, over the period considered (2015-2019), Hamtramck was next to last with only 16 total such incidents, for an average of just over three per year. Still too many, yes, but nothing compared to Detroit’s gargantuan sum of 517, averaging over 100 per year.
Flint and Warren tied for next with 55 total each, with Kalamazoo close behind with 53.
Obvious factors certainly affect these totals: Kalamazoo is home to several large universities or colleges, for example, and Detroit covers a huge area. Hamtramck, at only 2.2 square miles, has less area to worry about, but also a population density and relative walkability that result in a higher-than-average number of pedestrians out there.
Officers were looking specifically for driver behaviors that were known to put those on foot at risk: failing to yield to pedestrians in crosswalks; failing to stop at, or running, signals or stop signs, including before crosswalks; illegal turns; and the like.
However, they were also ready to admonish or ticket pedestrians whose behaviors put drivers in bad positions, such as by: not walking on provided sidewalks, but rather in the streets; not obeying signals; and the like.
Interestingly, October has been the worst month of the year for pedestrian deaths over this five-year period.
In a recent press release issued by Chief of Police Anne Moise, she reminds parents to remember that young children should not be left unattended outside, or allowed to play near roadways, especially busy ones (have you seen how people are driving in this town lately?!).
Children under 10 should not cross streets alone, particularly busy intersections, as they often haven’t yet developed the ability to properly judge car speeds or timing.
Parents should also, Moise suggests, set good examples by teaching children to cross at crosswalks, and to understand signals but not rely totally upon those alone.
Posted Nov. 20, 2020