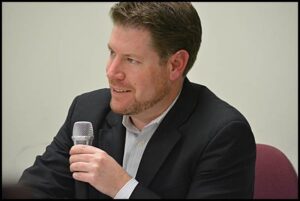 By Charles Sercombe
This time for real.
A COVID-19 case has now actually happened in Hamtramck City Hall.
City Clerk August Gitschlag announced recently that he has come down with COVID, which has forced the city to close his office and quarantine the employees there.
The city manager’s office is now handling all calls and inquiries that normally go through the clerk’s office.
A week ago, it was reported that City Councilmember Ian Perrotta falsely claimed that there was a prior COVID case out of a different city hall department.
He later said he suspects he was “spoofed,” but he came under criticism for not first contacting city hall about his alleged tip. Instead, he posted the claim on his Facebook page.
Gitschlag’s case underscores the increasing number of COVID cases in Hamtramck, which for the last two weeks has spiked to over 60 cases per week, with two additional deaths for the year in the last couple of weeks.
So far this year, there have been over 900 cases reported in Hamtramck, with a total of 29 deaths.
Gitschlag said he thinks he got the disease because of the huge number of people coming in to city hall to vote.
“Well, I guess with the amount of people I had to come in contact with over the last 3 weeks it was inevitable. I tested positive for Covid-19 yesterday morning,” Gitschlag said, on his Facebook page, last Friday.
“I AM OK.
“I have mild head cold symptoms and some fatigue. I will be alright. I was careful, wore masks (many) and burned my fingerprints off with hand sanitizer all day long … just wasn’t enough. Be smart out there everyone.”
Since his announcement on Facebook, there are two other employees in his office who have tested positive for COVID.
Gitschlag and his two employees are not the only city officials to contact COVID. Mayor Karen Majewski announced a couple of months ago that she tested positive for the disease, but she reported no symptoms.
She eventually tested negative for it.
At press time Thursday, Gitschlag reported that his symptoms were still like a having a head cold, and he is also still experiencing fatigue.
News of Gitschlag’s COVID case prompted several election workers to criticize the city’s handling of the matter.
At Tuesday’s city council meeting, they said that they were not informed of Gitschlag being diagnosed with COVID.
Angela Fortino said city officials acted “extremely irresponsibly,” and were “unprofessional, and lacked transparency.”
Gischlag said he only came in contract with chairmen of precincts and election workers assigned to handling absentee ballots, which was being done away from the public in a secluded room in city hall.
Mickey Lyons, who also said she was an election worker and was not notified of Gitschlag’s status, said she will file an ethics complaint with the state over how the matter was handled.
Posted Nov. 13, 2020