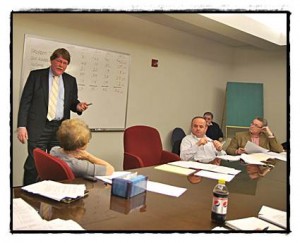 Former City Manager Bill Cooper reviews the city's financial picture with the city council shortly before being fired a week ago.

Update: March 19, 2001. We erroneously reported that the city council split on the vote to hire Erik Tungate as Hamtramck’s new Acting City Manager. The vote was actually 3-2, with Councilmembers Cathie Gordon and Anam Miah voting in opposition.

Councilmember Robert Zwolak walked out of the council chambers just before the vote was taken and returned after the vote. Mayor Karen Majewski was not required to break a tie vote, as we incorrectly reported, and did not vote on Tungate’s hiring.

However, she did say at an earlier meeting that she is supportive of Tungate’s hiring.

Within one week, Hamtramck lost one city manager and gained another.

To say the least, it’s been a whirlwind seven days that has plunged the city into a heated debate, with accusations of political gamesmanship.

Let’s start at the beginning.

Last Wednesday (March 7), the city council held a special meeting and fired City Manager Bill Cooper, but it was 3-3 vote and required Mayor Karen Majewski to cast the tie-breaking vote.

Although Cooper’s firing was sudden, it was not surprising. As the city’s financial crisis grew in the last few months, so had criticism of how Cooper was handling it. His firing was precipitated by a memo he sent to city employees saying that, come the end of April, there would be payless paydays for the next three months.

Cooper did not return calls for comment about his firing.

His firing had also came the day after he fired City Attorney James Allen (who was given a 30-day notice of termination).

Leading the charge against Cooper has been Councilmember Jankowski who for the past few months has needled Cooper for failing to provide various pieces of financial information.

“Our administration, we hired, did not do the job,” Jankowski said.

He later went on to add: “We need leadership in the administration that will perform more professionally.”

However, Councilmember Cathie Gordon warned that the council was firing Cooper without “cause,” and that Cooper will have grounds to sue the city for breach of contract.

She warned that if Cooper is successful in winning his lawsuit, the city will be required to pay him $200,000.

“How fiscally responsible is that?” she said.

Although Mayor Majewski cast the tie-breaking vote to fire Cooper, she did not initially offer an explanation on why she supported that action.

Now, flash forward to last Friday, and another special council meeting was held, this time to consider the hiring of Erik Tungate as the city’s new city manager. However, things didn’t go according to plan because Councilmembers Gordon, Robert Zwolak and Anam Miah – who all voted against Cooper’s firing – were a no-show.

Zwolak at least informed his colleagues he would not be attending, and urged the council to instead turn to the Michigan Municipal League, which has a list of retired city managers who are willing to step in on a temporary basis.

(Mayor Majewski, who is president of the MML, rejected this, saying the city doesn’t have enough time to do background checks and interviews for potential candidates. Tungate, she said, was someone who could begin the next day if hired.)

Their absence prevented any official action from taking place because there was no quorum. But Mayor Majewski opened the floor to discussion for those who were there, which included Tungate, police officers, firefighters and residents.

It was at this meeting that Majewski gave her reason for firing Cooper.

She said she had “stood in his (Cooper’s) defense in the past, but over the course of the last nine months, I just saw inertia. I didn’t see the action that needed to be happening.”

“I gave him (Cooper) the benefit of the doubt longer than you guys did,” she added.

Tungate is the city’s former Director of Community & Economic Development. He worked for the city from 2005 to 2007, and then went on to take a succession of jobs with Detroit, the state and Wayne County.

He has been laid off from his last job with Wayne County since January. 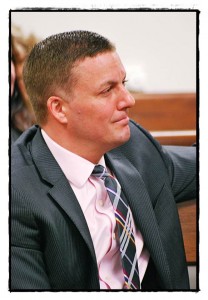 At last Tuesday’s regular council meeting, Tungate’s employment was once again brought up, and this time the full council was present.

But before his employment was considered, Councilmember Zwolak introduced a resolution to have the city’s Treasurer, Mike Wilk, take the job as Acting City Manager.

A lengthy discussion ensued, but ultimately, there was a tie vote, which required the mayor to step in. Majewski voted against Wilk’s hiring.

That led to an even longer discussion on Tungate taking the job.

Long story made short: Tungate was approved in a 3-2 vote, with Councilmembers Miah and Gordon voting in opposition. His pay rate was set at $7,500 a month.

On the very next day, Tungate was in city hall at 7:30 a.m. talking with department heads.

Councilmember Zwolak said the actions leave him “not optimistic for the spirit of Hamtramck.”