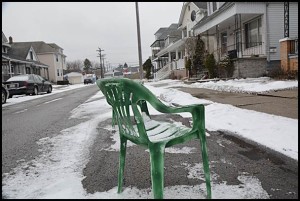 Want to save a parking space in front of your house? Better think twice, because the city is warning residents they could be ticketed for littering.

By Charles Sercombe
One of Hamtramck’s cherished traditions is coming under scrutiny from the city administration.
Residents who use old chairs, buckets, cones – you name it – to save a parking space are now receiving orange warning notices to stop it or face getting a ticket for littering.
“This is actually in direct response to resident complaints,” said City Clerk August Gitschlag, who was tasked with the job organizing the crackdown and was allowed by the city manager to talk about it.
The city manager has told department heads they may no longer talk to the media without first getting her permission.
Gitschlag said City Manager Katrina Powell, who recently moved here from Florida, noticed how “unsightly it is when people put random trashy items out to mark parking spots.”
The last time city hall attempted to clear the streets of various pieces of junk put out to save parking spaces was when former Emergency Financial Manager Lou Schimmel was here about 15 years ago.
He sent out a crew of DPW workers to drive through the streets in a truck and collect all the pieces of furniture.
There was a backlash, but residents got the message and the practice seemed to largely go away. But in recent years it has come back, and on just about every street you can see an item saving a parking space.
Gitschlag, who lives in Hamtramck, said he can sympathize. Parking, he said, “is a challenge in many densely populated urban environments.”

13 Responses to City cracking down on parking space savers