City gets a big boost from out-of-town help 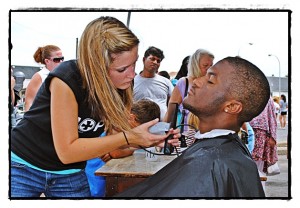 If it seems like Hamtramck was a little more crowded during the past two weeks, it’s because it was – several dozen churches came to the city to help pitch in.

Last week (July 26-30) nearly 500 kids from around the country came to Hamtramck to participate in “War Week.” Put on in conjunction with the Revival Tabernacle and the REAL Churches of Hamtramck and Detroit, the event was a week-long execution of community service with military-like precision. During the week the youth completed a city-wide clean-up that included Veterans Park and other neglected areas.

This week, the REAL Church was at it again when it hosted the Convoy of Hope in the city parking lot at Caniff and McDougall. On Wednesday (Aug. 4) parishioners from the church were joined by others from around the country to provide a host of services to the community. In addition to giving a bag of groceries and a health screening to those in attendance, the church also provided haircuts, family portraits and caricature drawings free of charge.

“It’s just an expression of this generation,” said Pastor Chilly Chilton of the REAL Church. “A lot of people have opinions of teenagers that are bad, but this is teenage love. These kids raised their own money to do this.”

Also going on last week was a rehabilitation project sponsored by Acts 29 and Weed and Seed. After Veronica Smith worked to get her childhood home out of tax foreclosure, the city stepped in to ask the two organizations if they could do anything to rehabilitate the exterior of the house. By pulling their resources together and enlisting the help of Appleton Alliance Church of Appleton, WI, the nonprofits answered the city’s call.

In addition to the regular carpentry crew from Acts 29’s AXIS, help came from four members of Appleton Alliance – a cardiologist, a veterinarian, a stand-up comedian and a computer expert who all gave up a week’s vacation to come to Hamtramck with their families – as well as a $500 donation to Weed and Seed by the University of Michigan Polish Club, the repairs were able to be made.

“I liked the idea that these people had never met Veronica,” said the Rev. Sharon Buttry of Acts 29. “They just trusted us to choose her home for painting and they came and worked as if it were their own house.”