City has its hand out for federal infrastructure funding 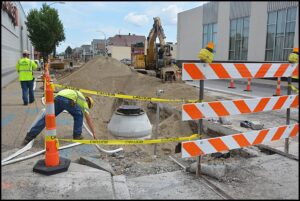 City officials are seeking millions of dollars to replace lead water lines, and to continue upgrading the aging water and sewer system that has caused some basement flooding.

By Charles Sercombe
Will Hamtramck see any of the newly passed national infrastructure funding?
That’s the multi-million-dollar question city officials are pondering.
There is no shortage of needs here.
Recently, a $1.2 trillion infrastructure bill was passed by congress, and Michigan is slated to receive $10 billion to fix bridges and roads, as well as for a slew of other projects.
But one of the key earmarks for the state’s funding – and of keen interest to Hamtramck – is for replacing lead service lines for drinking water.
Hamtramck recently discovered, through a sample from six households, that the lead level was just over what is considered safe to consume.
Many older households in the state are outfitted with lead water lines.
According to Mayor Karen Majewski, there is a good chance the city will see some funding coming this way, thanks to the recent federal program to help states and communities upgrade their infrastructure.
In her weekly update about the Covid pandemic with the community, through the city’s Facebook page, Majewski mentioned that Hamtramck is in line “to receive a significant infusion of cash.”
The estimated cost to replace the city’s lead service lines is $55 million, said Majewski.
According to the city, it costs $10,500 to replace each lead line leading into a residence.
About 500 lines have already been replaced in the last two years. The state has mandated that each community replace lead lines within 20 years – but the state is not providing funding.
In other words, each community has to eat that cost. Taxpayers are not yet being asked to fund the project here through a special property tax.
The city has over 5,000 more lines to replace.
City Manager Kathy Angerer said she has already been working with Gov. Gretchen Whitmer’s administration to make sure Hamtramck is near the top of the list of communities to get funding.
“The people of Hamtramck are alarmed—and rightly so. They have heard about Flint. They see Benton Harbor in the news,” Angerer said in a letter to the governor’s administration, asking for the state to allocate funding now to replace all of the city’s lead service lines.
“They are afraid that their tap water is also unsafe to drink, cook with, bathe with, and provide to their children. They are afraid that Hamtramck will be the ‘next Benton Harbor.’
“Our residents are distressed knowing that Hamtramck does not have the resources to fix the problem and expedite the replacement of the lead services lines on our own. This is where you can help immediately.”
She further stressed: “Our immigrant families already have tremendous challenges. They deal with serious issues daily, like finding a job, living in poverty, providing the right educational opportunity for their children, navigating access to healthcare, and all of this with English as their second language.
“Having the fear of lead in their water and exposing their children to this danger should not be yet another challenge for our families.”
Angerer also noted in her letter to the state, that about 40 percent of the city’s population of 28,433 is 18 and younger.
Younger people are especially affected by lead, and it has been proven to affect the ability of the every young to learn.
Michigan is also slated to receive $563 million for repairing and replacing crumbling bridges, and $7.3 billion to – as Whitmer famously put it — “fix the damn roads.”
But another huge chunk, $1.3 billion, is earmarked for replacing lead water pipes throughout Michigan.
There is more to the package, including expanding internet connection to rural areas that don’t yet have it.
Hamtramck has been able to tap into federal and state grants in recent years, to begin replacing the city’s aging water and sewer lines as well as to rebuild streets, such as has already been done with Holbrook and Caniff.
Posted Nov. 19, 2021