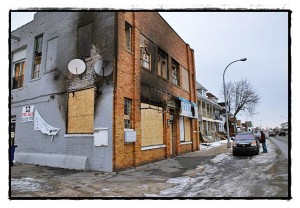 A weekend fire has left fire officials scratching their heads and is still under investigation.

On Saturday night, firefighters battled flames at the former Hamtramck Creamery building at the intersection of Holbrook and Gallagher. Though Fire Marshal Paul Wilk was unable to comment at length due to the fact that the cause of the fire is still being determined, he did say that it may be a total loss depending on the insurance agency’s final assessment.

The building housed three offices and was home to a travel agency and a drug counselor. The third office was unoccupied, and there were additional plans to open a mechanic shop in the rear. Though a sign lists the building as for sale, Wilk said that the current owner had bought the building under a land contract in 2009.

However, the building is also listed on the website trulia.com, which shows that it has been available for about two months. When a Review reporter contacted the listing agent, Kabir Ahmed of Home Pride Realty, he said that the building was in fact for sale, although the owner had just told him about the fire and asked that it be taken off the market.

At this point there are still more questions than answers. And with conflicting reports on its sale status, as well as the seemingly suspicious timing of the incident, it’s no surprise that Wilk concluded his conversation with The Review by saying there was still plenty to work out.