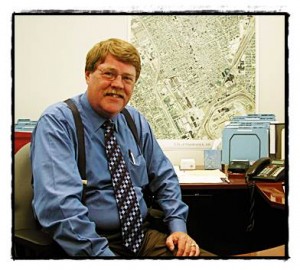 With the recent retirement of Police Chief Mark Kalinowski, the big question in town was: Who’s going to be the next chief?

Well, actually, the question was: Who’s going to be appointed the “acting” or “interim” chief until testing for the position is completed?

Drum roll, please … it’s … it’s … City Manager Bill Cooper, who announced his own appointment last Thursday. As you can imagine, news of his self-appointment didn’t go over all well with some in the Police Department.

Usually in a case like this, a lieutenant is named as temporary chief.

The two unions representing the Police Department said the matter is in the hands of their attorneys.

Privately, let’s just say there is a whole lot of grumbling and nasty remarks being tossed around within the department about Cooper’s perceived snub.

So far, Cooper said, there has been no legal action taken to undo his appointment.

But now, the bigger question: Why in the heck did he appoint himself?

Let’s just say up front, according to our sources within the department, there is a lot of division over who should be named chief, and the division has turned to confrontation among some in the department to the point where things are getting a little out of control.

Cooper said that recent issues have come to light, and the reason he appointed himself instead of one out of three current lieutenants is that he wanted to get first-hand knowledge of what’s going on within the department.
“I felt I needed to be closer to the situation,” Cooper said.

And, he added, tersely, that will give him an opportunity to “implement” changes.

Asked if his self-appointment was a vote of no confidence to those in line to be appointed chief, Cooper said: “You can say that if you want to, but that’s not how I would phrase it.”

We’re going to take that as a negatory, but keep in mind, Cooper didn’t say that.

However, Cooper did say that he does not intend to remain as chief.

“Once a chief is selected, I’ll step down,” Cooper said.

Ah, but that’s where things can get complicated. Whichever lieutenant scores the highest to become chief, won’t necessarily get the job. Cooper has to first make the appointment, and then the City Council has to approve it. If the council rejects the appointment and then the other lieutenants in line for the job, testing for the chief then goes to the next highest ranking group of officers.

The process is dictated by the officers’ union contract. But the unions in the department might want to check on some of the latest legislation that has been passed regarding public employees and their contracts.